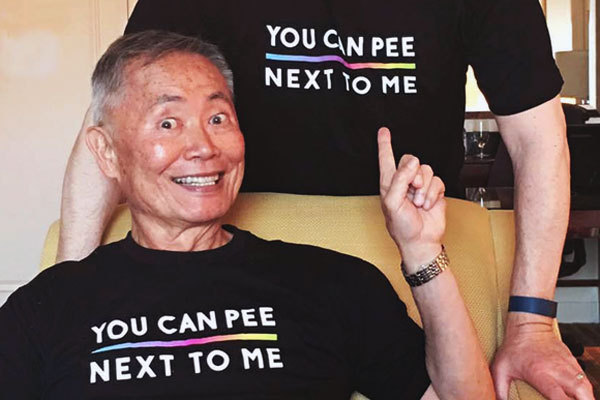 Omaze, a company that raises funds for nonprofits, and Equality Texas are teaming up on a fundraiser to help fight the anti-trans bathroom bill, which will be considered during the special session of the Texas Legislature, by selling t-shirts that read, “You can pee next to me.”

The t-shirt sale is part of a campaign that ends on July 7 during which Equality Texas hopes to sell at least 250 shirts at $29 each.

The sale is also a way to raise awareness of legislation which bars transgender people from using the bathroom that matches their gender identity and would prohibit local ordinances from protecting trans citizens from discrimination in public accommodations.

This is the second time this particular t-shirt has been pressed into service. The first was last year when LGBT activists in the state of North Carolina protested the passage of a similar bathroom bill. The law was repealed only after the state suffered economic losses which brought about the departure of businesses and the loss of major sporting events and concerts. In that campaign, gay activist and actor George Takei helped Omaze and Equality North Carolina sell the shirts through a media campaign. “If you show your support with one of these shirts, well, urine my good graces,” the actor said in one interview.

Texas LGBT activists and allies fear state legislators, under pressure from Lt. Gov. Dan Patrick, will be intimidated into passing the discriminatory bill.

According to the Texas Tribune, “It’s unclear whether any bathroom regulations will make it out of a special session, where lawmakers have a much shorter window to send proposals to the governor’s desk. But the governor’s decision to extend a divisive, months-long debate on the issue and give lawmakers a second chance to pass a ‘bathroom bill’ has pushed a dark cloud of uncertainty back over transgender Texans and their families.”

“There is no middle ground on discrimination. We cannot tolerate any effort that seeks to demonize, stigmatize, and endanger our transgender family members, friends, coworkers, students, and neighbors. We will not give up in our efforts to prevent the passage and enactment of such a dangerous and immoral law,” Equality Texas CEO Chuck Smith said in a statement.

“You Can Pee Next to Me” t-shirt sale. Shirts are $29 each and come in various styles. All proceeds benefit Equality Texas. Use this link to purchase.

By Ross Ramsey, The Texas Tribune June 19, 2017 The “bathroom bill” that preoccupied the Texas Legislature for the first...