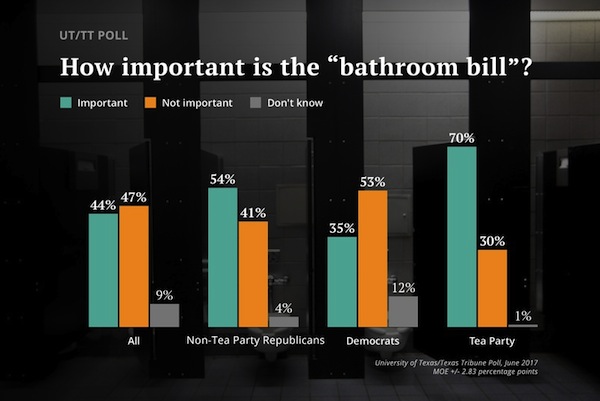 The “bathroom bill” that preoccupied the Texas Legislature for the first half of the year is important to only 44 percent of the state’s voters — and “very important” to only 26 percent, according to the latest University of Texas/Texas Tribune Poll.

During the regular session, lawmakers considered but did not pass legislation that would regulate transgender Texans’ use of public restrooms, blocking them from using facilities not designated for their “biological sex.”

The debate over that issue is going into overtime; Gov. Greg Abbott added it to the list of issues he wants legislators to consider in a 30-day special session starting next month.

“The lieutenant governor led the charge in trying to make this a partisan issue and making it more salient to Republicans,” said Jim Henson, co-director of the poll and head of the Texas Politics Project at the University of Texas at Austin. “It worked.

“Whatever their attitudes are, when we ask if it’s important for the Legislature to act, the number of Republicans who thought so increased 13 [percentage] points from February to June — and 31 points among Tea Party Republicans.

“The lieutenant governor preached to the choir, and they are singing more loudly now,” Henson said.

The conversation during the session did elevate the issue with some voters. In February, only 39 percent of Tea Party Republicans considered the issue important, and that rose to 70 percent. Among non-Tea Party Republicans, the numbers rose to 54 percent from 44 percent in February. Among Democrats, the numbers remained about the same during the course of the legislative session.

That was one of several cultural questions in the June UT/TT Poll. A majority of voters — 55 percent — say gays and lesbians should have the right to marry, a view shared by 77 percent of Democrats, but rejected by 52 percent of Republicans. Across those and most other subgroups in the poll, opposition to same-sex marriage in Texas is softening and support is growing. In June 2015, 66 percent of Democrats approved of same-sex marriages and 60 percent of Republicans did not. Overall, 44 percent of Texans were supportive while 41 percent were not. The U.S. Supreme Court ruled two years ago that gay marriage bans are unconstitutional.

“It’s going to take time,” said Daron Shaw, who co-directs the poll and teaches government at UT-Austin. “But there’s a broader push to inclusivity and diversity, particularly among young people.”

A slender majority of Texas voters believe sincerely held religious views should not trump anti-discrimination laws, the poll found. But — as with a lot of questions about cultural beliefs — it depends on who you ask.

Disclosure: The University of Texas at Austin has been a financial supporter of The Texas Tribune. A complete list of Tribune donors and sponsors can be viewed here.

From Broadway numbers to funky club bangers, there's  something in store for everyone when it comes to entertainment options in...