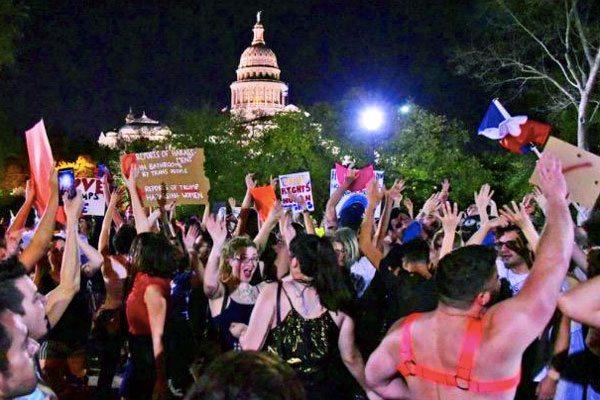 It’s been a year since 500 spandex and legwarmer-wearing Texans flooded the streets surrounding the Governor’s Mansion to protest newly-proposed “transphobic and homophobic laws” coming down the legislative pipeline.

Governor Greg Abbott was conveniently not home to witness the planned “queer dance freakout.” But, if you recall, the biggest piece of legislation that fit this description, Texas’ so-called “bathroom bill,” never got Abbott’s signature.

This year, LGBTQ Texans and their allies are bringing a second installment to a considerably larger stage: the Texas State Capitol. And this time, the chosen target is Senator Ted Cruz.

“It’s time for queer solidarity heading into the mid-term elections, so why not meet at the best gay bar in town — the Texas State Capitol,” the Facebook event declares. “Move your body in resistance to the conservative stronghold in Texas.”

Cruz is running to keep his spot as Texas’ junior U.S. Senator for a second 4-year term. But not if LGBTQ rights activists have anything to do with it. On Saturday, February 24, the same group behind last year’s dance-off will crowd the south steps of the state Capitol to shine a light on another conservative Texan’s anti-LGBTQ platform.

“Ted Cruz has consistently opposed equality for LGBTQ Texans and Americans. He has opposed both local ordinances that would have protected LGBT people in cities in Texas…” reads a press release from the event organizers. “Cruz attacked fellow Republicans for marching in pride parades, he led the charge to deny Texas couples marriage equality, and during his failed presidential campaign, he called 2016 the ‘religious liberty election’ [editor’s note: this is usually code for ‘the liberty to discriminate’].”

According to event organizers, the group already got permission from the State Preservation Board to hold the dance protest (which will be set to “all the gay classics”) on Capitol grounds. It’s unclear if Cruz plans on being in Austin or, for that matter, in Texas during this “resist-dance.”

Last time this event was held, pearl-clutching conservatives said the display only further underscored why anti-LTGBQ laws (like the one keeping transgender Texans out of the bathroom of their choice) were needed.

This disdain certainly didn’t keep the state legislature from passing the bathroom bill — or from this event happening again. In fact, just three months after the February 2017 dance-off, San Antonians flocked to then-Mayor Ivy Taylor’s Dignowity Hill neighborhood to dance out their opposition to Taylor’s cold relationship with the local LGBTQ community.

The event starts at 5 p.m. on Saturday and will end at 7 p.m. with a synchronized dance by at least a dozen drag queens. It’s unknown if Cruz’s top Democratic opponent in the Senate race, U.S. Congressman Beto O’Rourke, will join the shenanigans.

In the words of the event coordinators: “YES TO SHAKING OUR ASSES. YES TO THE FREEDOMS OF THE BODY. YES TO GOVERNMENT FOR THE HOMOS, BY THE HOMOS.”

LPAC, a national political action committee dedicated to building the "power of lesbians and queer women who champion LGBTQ rights,"...