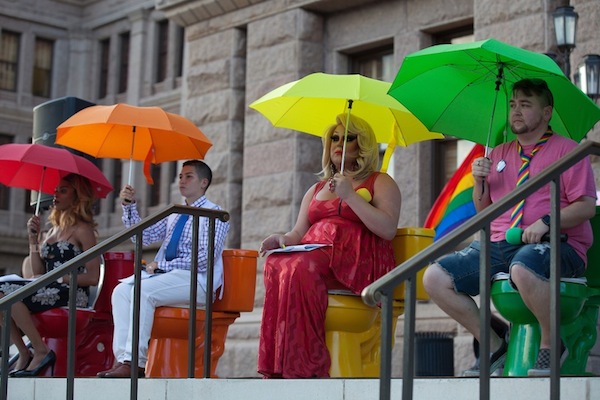 Activists from Austin's LGBT community protested proposals to restrict bathroom use for transgender people on the steps of the Texas Capitol on June 28, 2017. (Photo:Austin Price/The Texas Tribune)

There’s a slight sense of déjà vu at the Texas Capitol.

Legislative proposals to regulate bathroom use for transgender Texans are rolling in. LGBT advocates are fiercely denouncing them as discriminatory. Fearing economic fallout, business groups and corporations are rallying in opposition. And the leaders of the House and Senate are once again squarely at odds over the issue.

It’s a familiarity that has turned people like Chelsa Morrison — the mother of an eight-year-old transgender girl named Marilyn — into a “complete nervous wreck.”

“We’re kind of in a no-win situation until this stops — it just has to stop,” Morrison said in a resigned tone on Monday, the day before lawmakers return to the state Capitol to gavel in a 30-day special legislative session whose agenda includes efforts to regulate which bathrooms transgender Texans use.

Morrison and her daughter were among the hundreds of bathroom bill opponents who filled the halls of the Capitol in March for an overnight legislative hearing during which Marilyn told a committee of lawmakers that transgender children simply wanted to “tinkle and get out” of the bathroom.

“This time, for some reason, it’s a little bit more scary,” Morrison added, her voice breaking before she could continue. “This is our last chance to do anything before 2018.”

Efforts to restrict bathroom use for transgender men, women and children petered out at the tail-end of the regular legislative session, offering temporary relief for parents like Morrison. But Gov. Greg Abbott revived the issue when he added it to the 20 topics lawmakers could revisit in legislative overtime, extending a divisive and emotional months-long debate.

Several proposals to nix trans-inclusive bathroom policies across the state have already been filed. The possibility of any of them passing out of the Legislature is as unclear now as it was the first time around. And the dynamics of the fight are largely unchanged.

Lawmakers are back in Austin in large part because of Lt. Gov. Dan Patrick, who forced the special session by holding hostage the continuation of a handful of state agencies after legislation he deemed a priority — including bathroom restrictions based on “biological sex” — failed to pass during the regular session that wrapped up in May. Those proposals all died in the Texas House where Speaker Joe Straus was steadfast in his opposition to such legislation.

It was clear ahead of Tuesday that the fault lines between legislative leaders were not only still in place but had become more prominent.

In his crusade for bathroom restrictions and fight against Straus for holding up the measure, Patrick has been backed by social conservatives and religious groups in citing concerns about privacy and misuse of trans-inclusive policies by sexual predators.

“It’s not discriminating against anyone,” Patrick said Monday during a speech before the conservative Texas Public Policy Foundation. “I don’t want sexual predators masquerading as being transgender to enter into a bathroom to follow a little girl or somebody’s wife or somebody’s daughter as we have case after case.”

Proponents of the bill have provided virtually no evidence of such cases.

For Straus, opposition to any sort of bathroom bill has long been rooted in economic concerns. More recently, though, he’s revealed that he’s “disgusted by all of this” and publicly expressed anxiety about the negative impact such a law could have on transgender children, including possibly an increase in suicides among an already vulnerable population.

In a prepared statement ahead of the special session, Straus offered a measured take on how the House would consider the issue.

“The House takes every issue on the governor’s agenda seriously and will focus on doing what’s best for the people of Texas,” he said in the statement. “We will look at each issue closely and carefully consider how these ideas would affect our economy and the lives of the people we represent.”

Once again, the business community is warning about millions of dollars in economic fallout that could follow the passage of any bathroom bill — a renewed push that comes after House leadership questioned why business executives hadn’t pushed back harder against the proposals in person during the regular session.

About 80 business executives and representatives gathered at the Capitol on Monday morning to denounce proposals to regulate bathroom use as discriminatory and bad for business. Their press conference on the south steps of the pink dome came on the heels of the release of a letter signed by the CEOs and top executives of more than a dozen major Dallas-based corporations decrying the proposals, and a revived campaign by tech giant IBM, which dispatched nearly 20 top executives to lobby lawmakers at the state Capitol.

“On this discussion, conservatives can disagree with conservatives,” Jeff Moseley, the head of the Texas Association of Business, said during the press conference, seemingly encouraging other Republicans to oppose the legislation. “The position that you’re hearing today is really a very conservative position. We have to be careful to protect the Texas miracle.”

Economic concerns have emerged as a key line of defense for opponents of the bathroom bill, particularly after North Carolina experienced cancellations of business expansions and high-profile sporting events following the passage of its own controversial bathroom bill.

Patrick has brushed off any potential fallout, but similar questions about the bathroom bill have dogged proponents of the legislation.

“Obviously I’m pro-business,” Abbott said at a Friday campaign event after he was asked about the toll the bathroom bill could take on Texas businesses. “I want to do everything we can to ensure that we continue to grow business.”

But business leaders on Monday who said they’ve spoken to the governor about their qualms suggested their concerns had not garnered the reception they hoped.

“The reaction was, it’s included in the call for the special session,” Phillip Jones, the head of VisitDallas, said on Monday.

“We will continue to be heard”

For transgender Texans and LGBT advocates, the special session has become an extension of their efforts during the regular session, when they coordinated an unprecedented show of force.

Hundreds of transgender Texans and their allies descended on the Capitol for numerous lobbying days, protests and rallies. During two overnight legislative hearings, they easily dwarfed the number of supporters of bathroom bill supporters. And they’re promising a similar turnout in the next 30 days.

“We will stand up. We will continue to be heard,” said Stephanie Martinez, an activist with the Transgender Education Network of Texas.

Joining her will be Morrison and her daughter Marilyn.

It’s been a long journey for the pair. After struggling with her school over which bathroom she would be allowed to use, Morrison pulled Marilyn out of public school because the headaches, stomach issues and anxiety had become too much.

But Marilyn now channels that into being “her own best advocate,” Morrison says, and she plans to allow her to do just that during the special session.

“This means a lot to her,” Morrison said. “It’s her life we’re talking about.”

Morgan Smith and Jay Root contributed to this report. This article originally appeared in The Texas Tribune at this link.

A gay businessman from Dallas announced on Friday, July 14 that he has filed the necessary paperwork to initiate a...