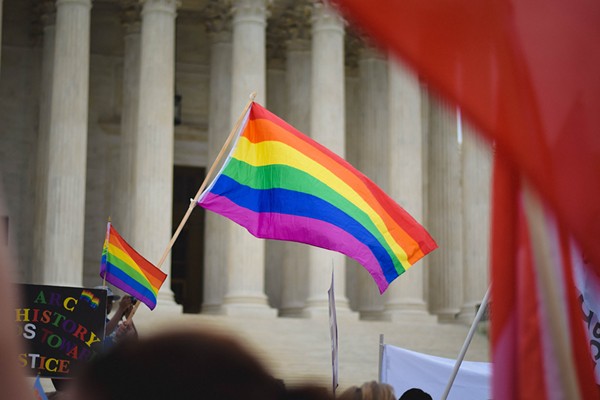 On Wednesday, March 1, the Texas Supreme Court will hear arguments over a lawsuit that not only targets the rights of married gay couples in the state but also seeks to blunt the impact of the landmark U.S. Supreme Court ruling that granted marriage equality nationwide in the first place.

The lawsuit, brought by some of the state’s most vociferously anti-LGBT conservative activists (with the blessing of Texas’ top state government officials), aims to block same-sex spouses of government employees in Houston from getting health benefits. They say it’s unfair that devoutly religious people like themselves have to “subsidize same-sex marriage.”

That the case is being heard at all is unusual, considering the judges initially rejected it in September. The following month, however, Gov. Greg Abbott, Lieutenant Gov. Dan Patrick and Attorney General Ken Paxton filed a brief in support of the anti-LGBT plaintiffs, and the state supremes revived the case. So now, Texas’ highest civil court will weigh in on a case that directly challenges the landmark U.S. Supreme Court ruling, called Obergefell v. Hodges, that granted marriage equality nationwide — a ruling that Texas’ far-right conservatives have been bucking against ever since it dropped.

The two lobbyists behind the fight have quite a history. Jonathan Saenz, president of conservative Christian group Texas Values, has led efforts in the past to ban gay men from leading Boy Scout troops and has said that legalizing gay marriage would encourage inbreeding. Jared Woodfill, the other activist behind the lawsuit, heads the Conservative Republicans of Texas, a staunchly anti-LGBT organization listed as a hate group by the Southern Poverty Law Center. Woodfill also spearheaded the anti-trans, fear-mongering campaign to reverse Houston’s equal rights ordinance in 2015.

At its core, the case questions whether Obergefell requires cities and other government employers to give taxpayer-subsidized benefits to same-sex spouses of government workers. In a filing with the court, the plaintiffs argue that the right to marry doesn’t necessarily “entail any particular package of tax benefits, employee fringe benefits or testimonial privileges.”

And Woodfill has high hopes for the case. “This particular opinion will go to the U.S. Supreme Court and is a potential vehicle for overturning Obergefell given the changing composition of the court,” he told the Texas Tribune this week. “Ultimately, I would like to see Obergefell overturned.”

The couples who sued Texas over its unconstitutional gay-marriage ban filed an amicus brief in support of equal benefits to married same-sex couples. One of those couples, Mark Phariss and Vic Holmes, released a statement this week saying, “What is being litigated is whether Texas can impose second-class status on our marriage and the marriages of thousands of other LGBT Texans. This position is wrong on the law and an affront to equality and personal freedom, not to mention a waste of taxpayer money.”

A new choral group, From Those Who Follow The Echoes, will showcase new music as part of the Kick-Off Party for Contemporary Art...