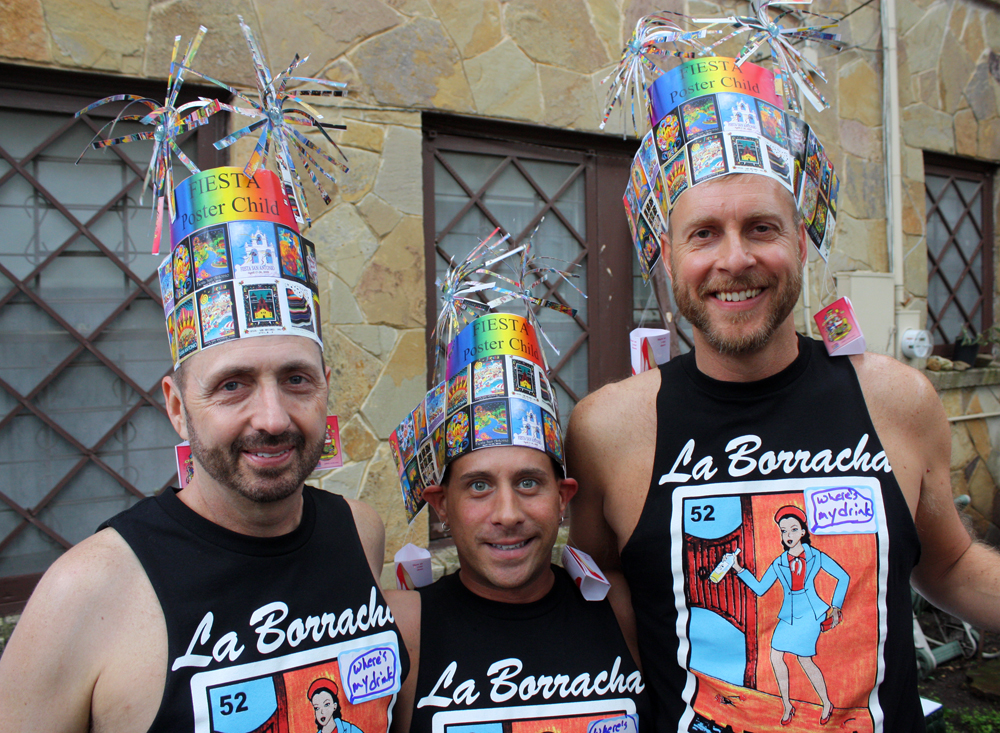 For others, it’s all about hats.

The Fiesta Hat Party in Monte Vista is one of the largest assemblies of San Antonio’s LGBT community you will find before noon. The party is held Fiesta Friday (April 24 this year) and breaks up early enough so everyone can attend the Battle of Flowers Parade.

Friday morning featured fedoras, boaters, bonnets, and all sorts of millinery. There were tiaras, coronas, cowls, and kerchiefs. There was a yarmulke, a couple of baseball caps, and muchos sombreros. But the most colorful and creative were the handmade headpieces created from cups, piñatas, and papier-mâché.

Photo by B. Kay Richter.

David Flores and his twin brother Ed are the official hosts of the Fiesta Hat Party, now in its 16th year.

David said the thunderstorms that rolled in April 23 threatened to dampen the festivities. “I was up at 3 a.m., and it was like, ‘Holy shit,’” he said. Fortunately, by 10 a.m., the only vestige of the rain was a soggy lawn and the humidity.

Ed and his friends helped out with two booths serving mimosas, a row of tables offering pastries and fresh fruit, a coffee pot (that hardly anyone used), and a pair of port-a-potties. “We started out with just a little party 16 years ago,” he said. “Now, it’s quite a group! News of the event travels by word of mouth.”

“At noon, we close the party and ask everyone to help us clean up so we can make it to the parade on time,” Ed said. “We usually watch the Battle of Flowers at the Menger Hotel or close to Dillard’s.”

David and Ed’s father, John C. Flores, allows his backyard to be the setting. He sat back, smiling, and sipping a drink, while the young folk reveled in the morning hours.

John spoke of organizing reunions for 500 members of the Flores family at his ranch near Elmendorf. So this fete of 250 revelers was perfect. “I used to run Allstar Furniture out on West Commerce,” he said. “Now that I’m retired, this party gives me something to look forward to.”

Margaret Flores Garza is John’s daughter. She kept busy organizing food and drinks, photographing the gaiety from the ground to the roof top, and mixing with guests from 9 a.m. until noon. “You could call me the director,” she said.

The welcome table sold Fiesta medals to benefit Fiesta Youth | Celebrating the LGBTQ Youth in San Antonio! There was also a lot of swapping of Fiesta pins as the merriment continued.

Photo by B. Kay Richter.

Hats ranged from simple fascinators to elaborate headgear several feet in height. Dale Ahrendt-Painter sported a hat with an image of him and his spouse Brad on the beach in Hawaii. The ocean sand is marked with their wedding date, April 22, 2014. Happy Anniversary Dale & Brad! And Viva Fiesta to all!

Mayor Ivy R. Taylor is cutting it close. On May 9, she is running for reelection and may end up...