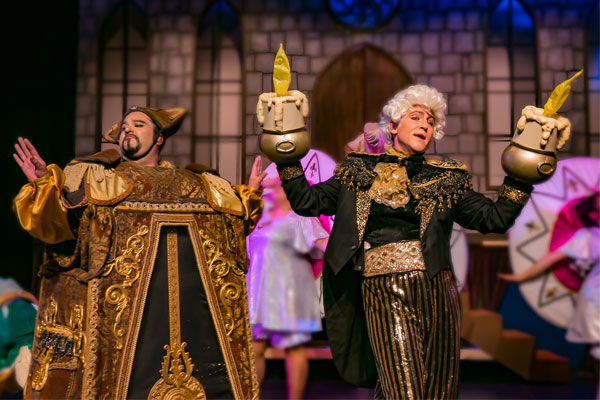 Disney's "Beauty and the Beast" opens at The Playhouse on September 30. (Dress rehearsal photos by Daniel Baumer)

The Playhouse San Antonio opens its 2016 – 2017 season on September 30 with Disney’s Beauty and the Beast at the Russell Hill Rogers Theatre. The production is directed by David Nanny and stars Carlye Gossen as Belle and Jeff Jeffers as the Beast.

With music and lyrics by Howard Ashman and Alan Menken, the musical tells the story of Belle, who must teach the Beast to love again in order to break the spell cast upon him and his entire household. The original film, released in 1991 during a period known as the “Disney Renaissance,” was the first animated film to be nominated for an Academy Award for Best Picture.

“As I began working on this show, I was increasingly intrigued by the stories of the supporting characters,” director David Nanny said in a press release. “Throughout this script are hidden gems of knowledge that are spoken by these characters that seem to have been in the wrong place at the wrong time. The lives of these characters were forever changed because of the split-second decision of one person, and they must now live with the consequences of that decision.”

Disney’s Beauty and the Beast runs through October 30.