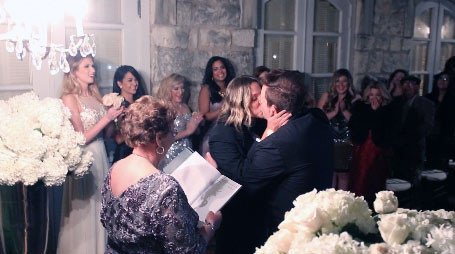 In celebration of the historic June 26 ruling from the Supreme Court finding a Constitutional right to marriage for same-sex couples, we’re posting stories and photos from our Spring wedding issue.

Clay Rodgers spent one of his most memorable dates in a car. He and then boyfriend Ryan decided to drive to Las Vegas. The couple had travelled together often, but typically by air, and the 18-hour trip allowed the pair to embrace the unexpected, stopping at little towns and parks along the way. “We had the most wonderful time not knowing what to expect–not even planning on anything,” Clay recalled.

When it came time to propose, it seemed only natural that Clay pop the question on a trip–at Muriel’s Jackson Square, an intimate restaurant just off New Orleans’ French Quarter. Though the couple had previously discussed marriage, the proposal came as a surprise Amidst the restaurant’s applause and a Champagne toast, Ryan was shocked. “He didn’t know what I was doing,” Clay said.

The newlyweds were married November 15,2014, in a lavish affair planned by Statue of Design with generous input from Ryan. (“He normally gets what he wants and I tried my best to give it to him.)” Not much has changed in their relationship since the wedding–they still give each other unanticipated gifts, and teach each other things every day, just as they did when they were dating.

And for Clay and Ryan, those little surprises are the biggest secret to their long relationship. “Just have fun. Don’t let the fire die at all,” Clay advises. “Once a relationship gets stagnant and you can’t learn and grow off of one another, that’s when it becomes really awkward, and kind of a waste of time.”

The Supreme Court of the United States today ruled that states cannot keep same sex couples from marrying and must...