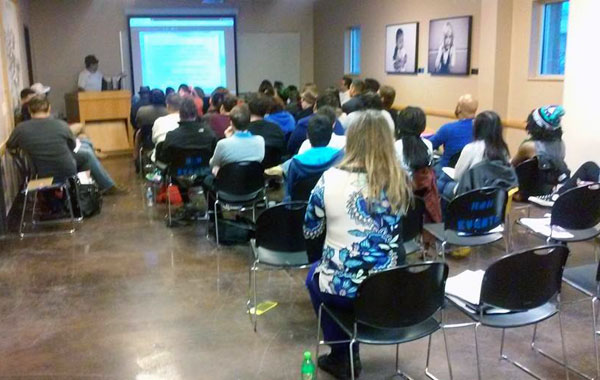 Approximately 45 volunteers from the LGBT and allied community came to a training session for the Thrive Youth Center for homeless youth which will be housed on the Haven for Hope campus. (Photo by Joseph Tanasi.)

It looks like the efforts aimed at finding a space for the Thrive Youth Center for homeless LGBT youth may soon come to fruition thanks to a partnership with Haven for Hope, the city’s homeless services campus. Looking ahead, Thrive could open as soon as mid-February.

Things have changed since last December when the Travis Park United Methodist Church filed for a zoning change to reclassify it’s building on East Travis Street as a “human services campus” in order to allow it to host the Thrive Center.

The city’s Zoning Commission approved the zoning change and their recommendation was supposed to be put before the City Council for a vote on January 15. Prior to that day, Scott Ackerson, the vice president of Haven for Hope, contacted Sandra Whitley, the executive director of the Thrive Center to tell her that Haven was interested in housing Thrive on its campus.

Whitley says she was of two minds when Ackerson first pitched her the idea. However, she says she soon realized that partnering with Haven for Hope had its advantages.

Whitley told Out In SA that at Haven, Thrive’s young clients, aged 18 to 25, would have all the services needed to help them re-enter society, including GED classes, job placement and career counseling as well as medical care.

Secondarily, Thrive would have its own dorm, restrooms and group space. Had Thrive set up shop at Travis Park United Methodist Church, it would have only been able to offer shelter two nights a week and client services would have been minimal or non-existent, at least in the beginning.

The biggest concern facing Thrive was that Haven for Hope had the reputation of not being a welcoming place for LGBT clients.

One young transgender woman told Texas Public Radio that she had tried staying there in the past but was harassed because of her gender identity. “People [are] just standing there watching me take a shower, inappropriately touching themselves while I was in the shower, it got very uncomfortable in there,” she told TPR.

Over the years, there has been talk of LGBT people being harassed and bullied by fellow clients and some staff members. Others reported that transgender homeless who sought services at Haven were put in dormitories that did not match their gender identity.

In an effort to make Haven more welcoming, staff members have been undergoing LGBT sensitivity training. “We feel very confident that we’re going to come to a good conclusion, a conclusion that’s going to benefit the LGBT community. What we are looking at right now are how can we integrate, how can we coordinate the services that our departments provide.” Haven’s director of external relations, Laura Cauldron, told TPR.

Whitely says 45 volunteers from the LGBT and allied community came to a Thrive training session on January 31, and she expects 20 or more to attend a second session she is planning in the coming days.

The only thing left to do before Thrive can open is to sign a memorandum of understanding with Haven.

Whitley told Out In SA that she felt Thrive had nothing to lose in its partnership with Haven for Hope. She says that if it doesn’t work out, Thrive will find its own building and continue its outreach in another location.

The Paul Taylor Dance Company at the Majestic