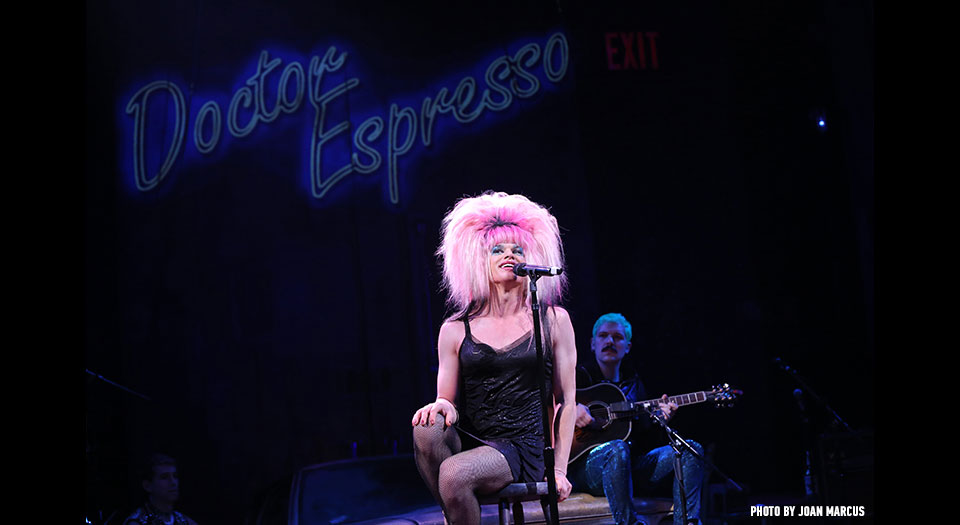 Michael C. Hall in Hedwig and the Angry Inch. Photo by Joan Marcus, from the official site.

Dear theater folks in San Antonio,
I’m just back from NYC, and here are some thoughts about current offerings (in case you are going soon, or over the holidays). Enjoy!
THE LAST SHIP: A new musical with some lovely and melancholy tunes by Sting, but an awful and confused book. The problem is that playwrights Logan and Yorkey can’t decide whether the plot—which hinges on a gaggle of unemployed shipbuilders uniting to build a ship just for the hell of it—is metaphysical and symbolic (like Ibsen’s The Master Builder) or socially realistic (like every play out of Thatcherite Britain). So it’s mostly preposterous, and I just couldn’t get past the fact that none of it made any sense. (To say nothing of the cardboard characters.) There are some lilting ballads and some affecting stagecraft—including the final tableau—but I just can’t believe that nobody plugged the gaping holes (so to speak) in this Ship.
A DELICATE BALANCE: Weirdly, I’d never seen this particular Albee play; and I had no idea it was so weird. Profoundly unsettling, in fact: like Virginia Woolf as doodled by Sartre. Lithgow is terrific, particularly with the monologues, and Glenn Close is more frosty than I had anticipated, but effective. The set is a little too big for the play—it’s supposed to be upper-middle-class, not the .0001%—but the direction (by MacKinnon) was deft, and the afternoon flew by. My theater companions and I chatted about it through both intermissions and then well into dinner. It’s that kind of play.
HEDWIG AND THE ANGRY INCH: I saw it with Michael C. Hall, and he was fabulous: energetic, catty, brassy. I was surprised that the musical scaled up so well to the size of a Broadway house, since it’s at heart a small, downtown club piece. I had mixed feelings about “wasting” a Broadway slot on something I already knew well (from the film and regional productions), but I was completely wrong-hed-ed. (Heh.) John Cameron Mitchell, the creator of Hedwig, steps into H’s high heels in January.
HERE LIES LOVE: I’m late to the party but I had a blast at this disco version of the life of Imelda Marcos. (In fact, there are no seats in the orchestra, justa dance floor. I was soon boogieing and shimmying with the élite of Manila, as is my wont.) With a rollicking score by David Byrne, this piece of immersive theater avoids a lot of Evita’s mistakes—there’s even a parody of Evita’s famous balcony scene—and its politics are harder-hitting, with a lot of documentary film reels. Alex Timber’s staging was innovative and delightful, and I was really swept along by it. I’m positive that they will be remounting this in other ‘theater’ towns in American (Chicago, LA, etc): if they do, by all means, go. It closes soon in NYC.
(Oh, and I also saw Street Corner Arts’ WAITING FOR LEFTY here in Austin, where I am sabbatical-ing. Terrific ensemble production, but Lefty never showed! Goddammit.)
Sharing
Authors

January 10  and 11, Austin-based A’lante Flamenco will debut “Prophecies” at the Carlos Alvarez Studio Theater in the Tobin Center....