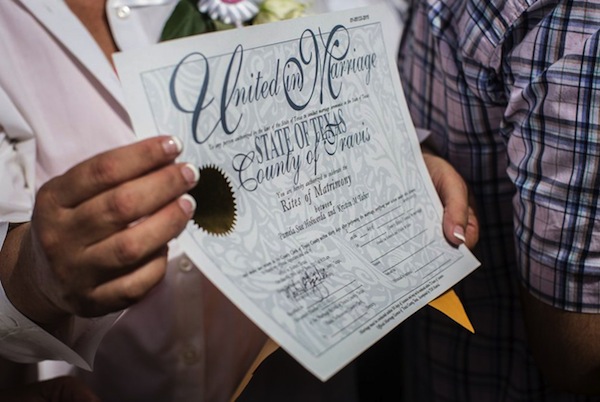 Pamela Holwerds holds up her marriage license following the ceremony that married over 40 same-sex couples on the south lawn of the Texas Capitol in Austin on July 4, 2015. (Photo: Tamir Kalifa)

Denying the city of Houston’s request, the U.S. Supreme Court will not review a June decision by the Texas Supreme Court, which ruled that the landmark decision legalizing same-sex marriage does not fully address the right to marriage benefits.

The high court on Monday announced it would not take up the case — which centers on Houston’s policy to provide spouses of gay and lesbian employees the same government-subsidized marriage benefits it provides to opposite-sex spouses — just months after the city of Houston filed its appeal, arguing the state court’s June decision “disregarded” precedent.

In that decision, the Texas Supreme Court threw out a lower court ruling that said spouses of gay and lesbian public employees are entitled to government-subsidized marriage benefits, and it unanimously ordered a trial court to reconsider the case. The ruling found that there’s still room for state courts to explore “the reach and ramifications” of marriage-related issues that resulted from the legalization of same-sex marriage.

That’s despite the U.S. Supreme Court’s landmark ruling in Obergefell v. Hodges, which legalized same-sex marriage nationwide in 2015 and noted that now-defunct marriage laws were unequal in how they denied same-sex couples the benefits afforded to opposite-sex couples.

In its decision, the Texas Supreme Court noted that Obergefell requires states to license and recognize same-sex marriages just as they do opposite-sex marriages but did not hold that “states must provide the same publicly funded benefits to all married persons.”

That does not mean Houston can “constitutionally deny benefits to its employees’ same-sex spouses,” the court added, but the issue must now be resolved “in light of Obergefell.”

“Equal recognition of same-sex marriage requires more than a marriage license; it requires equal access to the constellation of benefits that the state has linked to marriage,” Houston attorneys wrote in their brief to the court.

But amid conservative efforts to relitigate that ruling, two Houston taxpayers — represented by same-sex marriage opponents — have moved forward with their case, arguing that the interpretation of Obergefell is too broad and that the right to marry does not “entail any particular package of tax benefits, employee fringe benefits or testimonial privileges.” (In a separate case against the state’s now-defunct ban on same-sex marriage, the Texas attorney general’s office actually argued that marriage is a right that comes with benefits the state is entitled to control.)

Lawyers for the city of Houston have argued, in part, that opponents are without a legal avenue to even pursue their claims because the city’s policy is protected under Obergefell, which they pointed out explicitly addressed “marriage-related benefits.”

Amid the litigation, Houston has continued to provide benefits to all of its married employees.

Originally published in the San Antonio Current. San Antonio has become the first city in Texas to sign onto an...