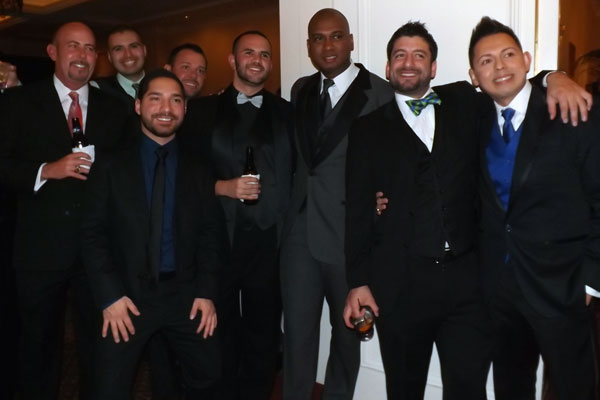 Partygoers at the 2013 HRC Gala and Silent Auction. (Photo by Antonia Padilla)

Labor Day marks the end of summer and the beginning of fundraising season in San Antonio’s LGBT community. While fundraising goes on year-round, the fall and winter are when many local nonprofits schedule signature events.

The season kicks off on September 26 with the Stonewall Democrats of San Antonio Awards Presentation and Comedy Show at The Playhouse. Stonewall used to have an annual awards banquet but last year they changed the event to consist of an awards presentation and comedy show.

The grand dame of local fundraisers, the HRC Gala and Silent Auction, will be held on November 21 at the posh (but cavernous) JW Marriott Hill Country Resort and Spa. The black-tie affair includes a cocktail party, dinner, awards and an after party.

Two events sponsored by religious organizations include an evening of dancing. The Dignity Fall Ball on November 7 and MCCSA’s Love’s Day Dinner and Dance on February 6 are annual soirées where revelers kick up their heels.

One fundraiser that will not be held this autumn is the San Antonio AIDS Foundation’s Run and Walk for AIDS. Normally held in September, the event will instead be held in Spring 2016 to accommodate SAAF’s WEBB Party which is being moved from April to October next year.

Save the dates! — A random list of upcoming fundraisers.

September 26, 2015
Stonewall Democrats of San Antonio Awards Presentation and Comedy Show at the Playhouse. Tickets are $35 and available on ActBlue.com.

November 21, 2015
San Antonio HRC Gala and Silent Auction at JW Marriott Hill Country Resort and Spa. General admission is $195. Use this link for more information and to purchase tickets. Military and student discounted pricing will be offered at select pre-gala events.

The San Antonio Music Awards Showcase isn’t until September 26th, but voting for the awards is already underway. You can...