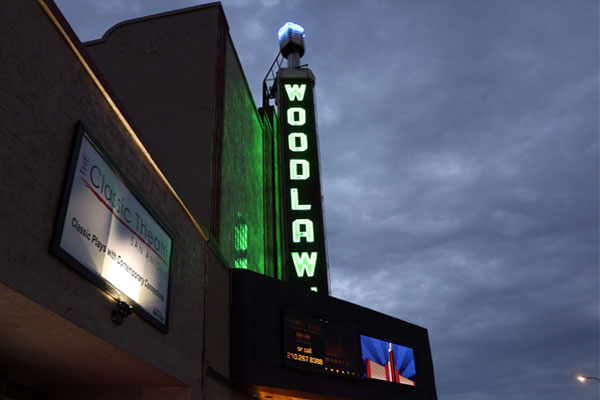 The Woodlawn Theatre will be welcoming San Antonio’s LGBT community to a series of Pride Nights it will host during their 2018 season.

The special evenings will offer Pride Night guests discounted tickets and pre-show socials with hors d’oeuvres, drink specials and live music, all followed by a performance of the theatre’s latest musical. The Woodlawn Theatre’s production of “Pippin.”

A press release from the theatre says it “has long been committed to inclusivity in all aspects of their organization and the addition of Pride Nights is a natural progression for the performing arts theatre.”

Luther’s Cafe, which is located on the Main Avenue Strip, will be providing support for each Pride Night. “Luther’s Cafe has always supported both the arts and diversity here in San Antonio. We look forward to again combining these goals with our support of the Pride Nights at the Woodlawn Theatre,” says Scott Lee-Ross, the cafe’s marketing director. The foyer and lobby of the Woodlawn Theatre.

Since a major renovation in 2012, the Woodlawn Theatre has been staging musicals which have been lauded by local theatre critics and audiences alike. The theatre, which first opened as a cinema in 1946, was designed by architect John Eberson who also designed the Majestic Theatre.

“To celebrate San Antonio’s wonderfully diverse community, we chose to host a Pride Night for every run for our upcoming 2018 shows,” Christopher Rodriguez, executive and artistic director of the Woodlawn said in a statement. “Whether you’re single, married, or with kids, everyone has a place at our theatre. We invite the LGBTQ+ community to meet, mix and mingle and, of course, enjoy a fabulous show.”

For more information about the Woodlawn Theatre, the 2018 Season, and Pride Nights visit woodlawntheatre.org or call 210.267.8388.

In the nine years since its premiere on Logo, RuPaul’s Drag Race has become a television staple satirizing gender stereotypes...