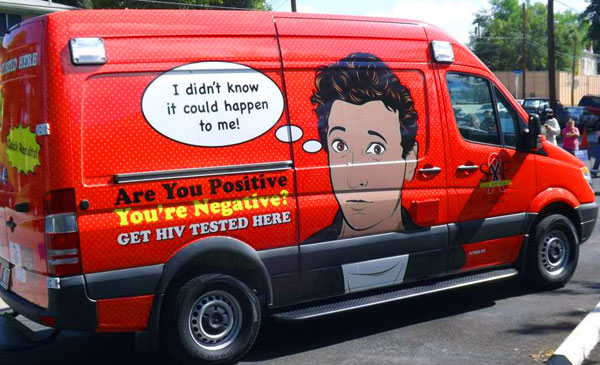 The San Antonio AIDS Foundation's HIV testing van. As World AIDS Day approaches, it's a reminder that 78 percent of all new cases of HIV infection in Bexar County are among young gay and bisexual men. (Photo QSanAntonio.)

As the local observance of World AIDS Day approaches on December 1, it serves as a reminder that the number of those infected is rising in San Antonio, particularly among gay and bisexual men.

Bexar County saw an 11 percent increase in HIV infection from 2012 to 2013, according to statistics released by the San Antonio Metro Health Department last summer. The number of those infected rose 62 percent since 2006. The rate of infection in Bexar County is almost triple the rest of the state.

In 2013, 78 percent of all new cases of HIV infection in Bexar County were among young gay and bisexual men.

“This generation feels immune to it. Well, it’s not a ‘death disease,’ people are not dying; they’re living a lot longer. So they’re not that afraid of it,” Alberto Barragan, testing coordinator for the San Antonio AIDS Foundation, told KENS-TV last August.

The numbers in Bexar County mirror a national trend.

According to the Centers for Disease Control and Prevention, “Gay, bisexual, and other men who have sex with men (MSM) represent approximately 2% of the United States population, yet are the population most severely affected by HIV. In 2010, young gay and bisexual men (aged 13-24 years) accounted for 72% of new HIV infections among all persons aged 13 to 24, and 30% of new infections among all gay and bisexual men.”

Dr. Anil Mangla, assistant director for communicable diseases at Metro Health, told the San Antonio Express News that the higher numbers of HIV in Bexar County among gay and bisexual men are partially a result of more testing.

“As we do more testing, we can identify more individuals. When you look at it from the epidemiologic point of view, this is a good thing in a way, because now we are identifying cases that we would not have identified before,” Mangla told the Express-News.

“The most important thing is that, you may be asymptomatic, get tested and know your status. That is very important because once you know your status, you can get treated and be fine. But, you don’t want to be untreated and pass the disease to others, and eventually get really, really sick,” Mangla added.

Health experts say getting tested is the first step. Those who test positive also need to keep up with their medications. In a study released on November 25, the CDC found that 70 percent of Americans who have HIV do not have the disease in check, and many are no longer treating the illness. The study revealed that younger people were more likely not to have HIV under control.

World AIDS Day in San Antonio will be observed on December 1 at St. Phillips College, 1801 Martin Luther King Drive. There will be HIV testing from 4 to 7 p.m. Gathering of Remembrance and Hope from 6 to 8 p.m. In addition to World AIDS Day, the San Antonio AIDS Foundation has organized AIDS Awareness Week with additional events throughout the week of December 1 through 5.