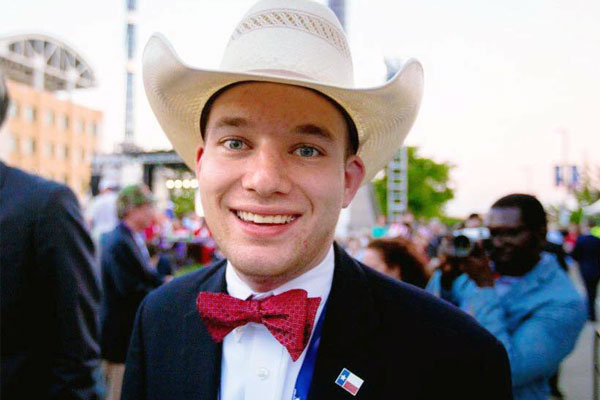 Colton L. Buckley is a gay Republican and was a delegate the Republican National Convention. (Photo: Facebook)

When the Republican National Convention convened in Cleveland last month, the Texas delegation included a 21-year-old delegate who says he came out two days after the shootings at the Pulse nightclub in Orlando.

When he got to the convention, Colton L. Buckley says he felt welcomed. “No longer was I the closeted elephant in the room,” Buckley said in an interview with Youth Radio. “People at this convention and across the state of Texas shake my hand and pat me on the back and say, ‘What you did was just, and it’s opening the door for other people,’”

In an interview with The Blaze, the conservative network founded by Glenn Beck, Buckley spoke of the Orlando shootings, “I wanted push out the narrative and the fact that it could have been me, it could have been some of the folks who are legislative directors and chiefs of staffs of Texas politicians and Republican politicians across the nation . . . This is an American issue, this is a hate crime and this is a terrorist attack against one of the smallest minorities in the nation and we need to circle together and stand up for our brothers and sisters in the LGBT community.”

Buckley hails from Gatesville, Texas, a town of about 15,000 inhabitants just north of Kileen. He is a graduate of Tarleton State University, where he pursued a Bachelor of Science degree in Agricultural Services and Development with a minor in Political Science. His Facebook page says he’s “an eighth generation Texas rancher” and the founder and managing partner of Buckley Solutions, a public relations/political consulting firm.

The young Buckley’s resume includes work on several political campaigns. In 2014, he served as campaign manager for Sid Miller who ran for Texas Agricultural Commissioner. Miller went on to win the election and appointed Buckley to Governor Greg Abbot’s Young Texans Steering Committee.

In an interview conducted at the convention, Buckley told Slate, “Whatever I do in my bedroom does not affect Donald Trump. It doesn’t affect any Republican candidate.”

In the Slate interview, Buckley insists only a “quarter-page” of the Republican platform is anti-LGBT. He says part of the problem of coming out in the Republican Party is “not enough of us are out.”

Despite the obstacles, Buckley remains undeterred. “Being a gay Republican is like being a African American in the 30’s, 40’s, 50’s and 60’s both in terms of political parties and rights established by the Federal government. It’s a long haul and we’ll continue that march,” he says.

“I may be one of the most conservative gay Republicans here because of the fact that I don’t believe in same-sex marriage,” he told Slate. “Marriage is a religious term between one man and one woman. As a gay man I don’t think the government should be involved in handing out marriage licenses. I think the government should give everyone, straight or gay, a civil union not a marriage.”

Last week, it was revealed that Texas Attorney General Ken Paxton accepted over $100,000 from the founder of a company who...