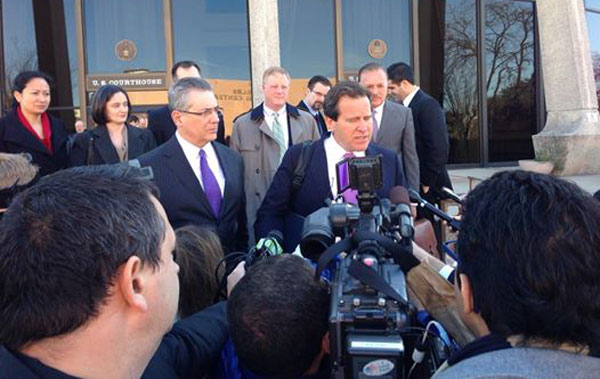 State Attorney General Greg Abbott issued a response on November 25 to a motion filed by the plaintiffs in the Texas equal marriage case asking Judge Orlando L. Garcia to lift the stay he imposed in February after finding the state’s ban on same-sex marriage unconstitutional.

The motion was filed on November 24 by attorneys from Akin Gump on behalf of Mark Phariss and his partner Vic Holmes of Plano, and Cleopatra DeLeon and Nicole Dimetman from Austin.

In his response, Abbot writes:

The plaintiffs’ unfounded challenge to this Court’s decision to stay the execution of the preliminary injunction should be denied for several reasons. The plaintiffs’ motion is untimely, coming nine months after the Court’s unopposed stay and at the cusp of expedited oral arguments in the Fifth Circuit. The motion is also out of order, since the Court stayed the entire case pending appeal and the plaintiffs have not sought to reopen the case. The plaintiffs requested relief is also jurisdictionally barred because it would interfere with the Fifth Circuit’s appellate jurisdiction and it would alter the status quo while the case is on appeal.

The impropriety of the plaintiffs’ motion is matched by the weakness of their substantive arguments. The sole purported basis for their request — the Supreme Court’s denial of certiorari in other same-sex marriage cases — has no constitutional significance, as they admit, and it actually cuts against their argument for lifting the stay. Furthermore, the plaintiffs’ alleged harms are speculative or have already been considered by the Court.

The couples filed their original federal lawsuit challenging the state’s marriage ban on October 28, 2013 in San Antonio. On November 22 of that year, the they sought a preliminary injunction to bar Texas from enforcing the ban. Their case went to court on February 11 of this year.

Two weeks after the hearing, Judge Garcia declared Texas’ ban on same-sex marriage unconstitutional. Garcia issued a stay which has been in effect while the state prepares its appeal to the US Court of Appeals for the Fifth Circuit in New Orleans, where it will be heard in January.

Daniel Williams, a legislative specialist and field organizer for Equality Texas, told Out in SA that if Judge Garcia lifts the stay there is still another hurdle for couples who would want to marry right away.

“If a marriage window opens up there will be a 72 hour waiting period between obtaining the license and getting married unless it is waived by a judge from family court, the state supreme court, the court of criminal appeals, a county judge or a state appeals court judge.”

World AIDS Day a reminder of high rates of HIV among S.A. gay and bi men

As the local observance of World AIDS Day approaches on December 1, it serves as a reminder that the number...