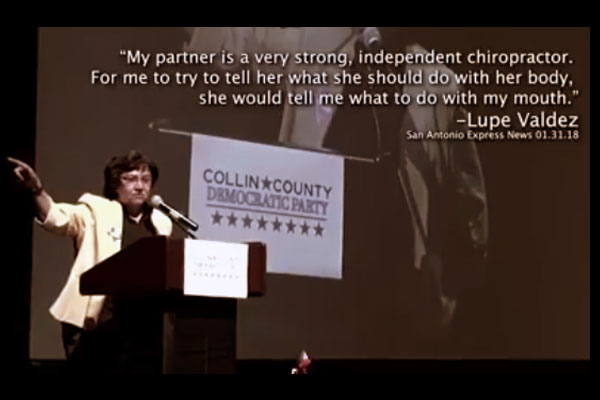 Texas Governor Greg Abbott released an ad attacking Democratic gubernatorial candidate Lupe Valdez as being “wrong for Texas” and makes mention of her sexual orientation indirectly by displaying a quote by Valdez in which she mentions her partner.

In the 30-second ad, Abbott slams Valdez saying she would overturn legislation banning sanctuary cities and the state’s restrictions on abortion, and would expand Medicaid.

While touting that Abbott’s administration has made Texas “the most pro-life state in the nation,” the ad displays a quote from a January interview Valdez had with the San Antonio Express-News in which she says, “My partner is a very strong, independent chiropractor. For me to try to tell her what she should do with her body, she would tell me what to do with my mouth.”

The Dallas Morning News asked the governor’s spokesperson, John Wittman, if Abbott was trying to “reinforce that Valdez is gay.” Wittman responded, “The [Express-News] quote is a way to remind people that Lupe Valdez is anti-life, pro-abortion.”

The ad was released on the eve of a May 11 debate between Valdez and her runoff opponent Andrew White. The two are slated to face off in Austin at St. James Episcopal Church. The debate will not be televised, but a live stream of the 7 p.m. event will be made available through KXAN.com.

In the March 6 Democratic primary, Valdez, who is the former Dallas County Sheriff, scored 43 percent of the vote in a field of nine candidates. White received 27 percent.

Since her impressive showing in the primary, Abbott has zeroed in on Valdez on the assumption that she will be his general election opponent. However, she has lagged behind White in fundraising and failed to win important endorsements.

The Texas Tribune reported, “Valdez isn’t nervous about the debate. She isn’t excited, either. She largely brushes off speculation about how her performance Friday will affect the runoff. The game she’s playing isn’t one that turns on 30-second sound bites. ‘In order for the Democrats to win in Texas, it’s gotta be grassroots,’ she said.”

Early voting in the May 22 runoff starts Monday, May 14.

When San Antonio photographer Antonia Padilla decided to go through her archives late last year, she discovered negatives and contact...