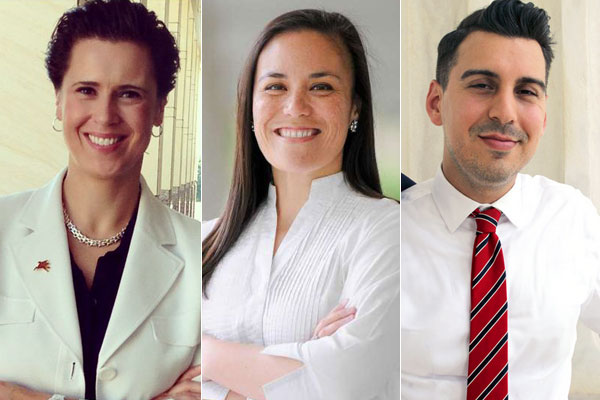 Three LGBT Congressional candidates from Texas scored victories in the Democratic Party runoff on May 22 and will now advance to face Republican challengers in the November election.

Lorie Burch from Plano, Gina Ortiz Jones from San Antonio and Eric Holguin from Corpus Christi easily won their races with large majorities. One candidate, Mary Street Wilson, a lesbian minister from Austin, lost to Joseph Kopser in the runoff for the 21st Congressional District.

According to estimates by Houston’s OutSmart magazine, a record 52 openly-LGBT candidates ran in Texas this year for national, state and local seats. Thirty-one of those, including lesbian Lupe Valdez who’s running for governor, will be on the ballot in November.

“While bigoted state legislators in Austin continue to divide the state and target our community, Texans are voting for LGBTQ candidates because we are authentic, values-driven leaders who deliver on promises,” Annise Parker, former Mayor of Houston and current CEO of the Victory Fund, said in a statement after the election.

Lorie Burch, an attorney who graduated from Trinity University in San Antonio and earned her law degree at the George Washington University School of Law School, had a landslide victory, netting 75 percent of the vote against her opponent Sam Johnson.

In endorsing her, the Dallas Morning News wrote, “We tip narrowly for Burch, 41, given her time working with congressional leaders in Washington, D.C., for five years and her experience as the national president of the bipartisan American Business Women’s Association.”

In a Facebook post on the morning after her victory, Burch wrote: “I do not believe that this moment is about turning anything blue or keeping anything red. When politics is a game of winners and losers, we the people all lose. This moment, this movement, is about our own humanity and that there is no us versus them; there is just us. Let’s commit to fighting these false labels that divide us and remember that we are stronger when we allow ourselves to see the world through other people’s eyes and to find ways to share this community, this country, and this world together.”

San Antonian Gina Ortiz Jones hit the ground running from the day she announced her candidacy last August, scoring important endorsements from a variety of high profile organizations and individuals.

In her runoff against Rick Treviño, Ortiz Jones earned 68 percent of the vote. She will face off against incumbent Republican Will Hurd in the November election.

Jones is a graduate of John Jay High School who was raised by a single mom who came to U.S. from the Philippines. She earned a BA and MA in economics from Boston University which she attended on a four-year Air Force ROTC scholarship. After serving in the Air Force for three years, Jones pursued a career in national security, intelligence, and defense which included working for the Pentagon’s Defense Intelligence Agency and in the Office of the U.S. Trade Representative.

In a statement on election night, Ortiz Jones said, “Tonight’s vote makes it clear: Democrats are united to change Congress and send politicians like Will Hurd packing. I congratulate Rick Treviño on a campaign that brought passion and clarity to the issues Texan families face. I look forward to working with him, and people across Texas, to make sure Congress serves communities like ours by delivering on health care that working families can afford, instead of serving special interests that will never put Texas families first.”

Eric Holguin is a native of Corpus Christi who has served as a Congressional intern and worked in the New York City Comptrollers office. He graduated from Texas A&M University-Corpus Christi. Holguin got 62 percent of the vote against his opponent, Raul (Roy) Barrera

In the primary election in March, Holguin had come in second with 23 percent of the vote with Barrera netting 41 percent.

“It shows that the hard work that we put in since the primary in March is paying off,” Holguin told the Victoria Advocate. “We are definitely going to be broadening our strategy and doing what we can to let people know we care about issues that affect their daily lives. While Republicans are focused on (President Donald) Trump and all his antics, or nonsense rather, I want to talk to people. I don’t care if you are Democrat, Republican or independent.”

On June 30, Holguin will be one of nine candidates who have filed to participate in a special election to finish the term of former U.S. Rep. Blake Farenthold who resigned after it was revealed he used $84,000 from a taxpayer-funded account to settle a sexual harassment claim.

“Last night’s win isn’t about me – it’s about all of us,” Holguin wrote on Facebook the day after the election. “WE DID THAT. And thank you for doing your part to make that happen. Gracias por su apoyo. We march on to the Special Election and then the General in November. Let’s do this.”

By Patrick Svitek and Brandon Formby The Texas Tribune, May 22, 2018 After a tight race throughout much of the...