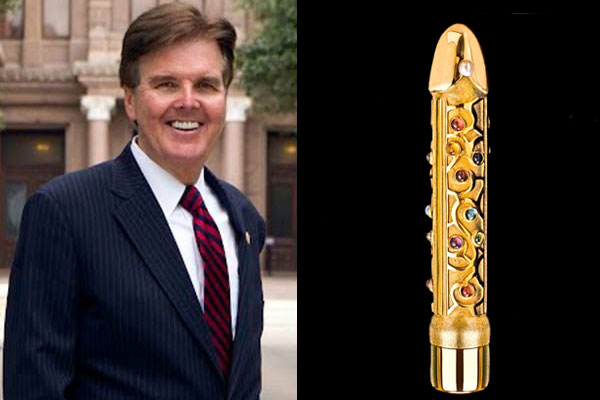 The Stonewall Democrats of San Antonio will give Texas Lt. Governor Dan Patrick the Genitalia Fixation Award at their annual banquet on September 24. (Photos Facebook and FunnyJunk.com)

What do you give someone who focuses like a laser beam on LGBT inequality? Well, the Stonewall Democrats of San Antonio have come up with the perfect honorarium: the Genitalia Fixation Award, which this year will be given to Texas Lt. Governor Dan Patrick at the group’s annual banquet on Saturday, September 24.

Stonewall created the award in 2015 after they decided that they needed to call out Texas politicians who consistently promote anti-LGBT legislation.

The first recipients of last year’s Genitalia Fixation Award were state Representatives Debbie Riddle (R-Tomball) and Gilbert Pena (R-Pasadena) who were cited for their “service” during the 84th session of the Texas Legislature. In the last session of the legislature, Riddle filed House Bill 1748 that would make it a misdemeanor for a transgender person to use a public restroom that matches their gender identity and would punish business owners who would allow them to do so. Punishment for breaking Riddle’s bathroom law would have been up to one year in jail and a fine of up to $4,000. In that same session, Pena filed House Bill 2801 which would have made schools liable for up to $2000 damages if they allowed transgender students to use restrooms based on how they identify. “How many girls in our high schools are going to be willing to allow some transgender male into their bathroom? Would you allow that for your daughter? I would not allow it for my daughter,” Pena told the Texas Observer.

Neither Riddle’s or Pena’s bills ever made it to the House floor. Riddle’s bill failed to receive a hearing and Pena’s bill died when he removed it from consideration in committee. A bigot at all costs

Patrick’s unbridled bigotry manifests itself as selfish streak, one that could risk the City of San Antonio losing the 2018 NCAA Final Four basketball tournament.

In July, the NCAA announced it would require cities which host championship tournaments to explain how they would provide an environment that is safe and free from discrimination. Earlier this month, the NCAA yanked seven championship games from North Carolina in protest of laws targeting the transgender community.

Patrick has been critical of the NCAA’s decision saying in a statement, “The NCAA is attempting to be politically correct. This issue has nothing to do with discrimination. What about a woman’s right to privacy and security in a ladies’ bathroom, locker room or shower? What about male sexual predators — the ones who use the internet to go after children — who will use such policies as a means to enter a women’s dressing room, as we have seen.”

In June, Patrick stepped up a campaign against trans students in Texas by opposing the Obama administration’s guidance urging schools to respect trans students’ identities. “I will be sending a letter to every superintendent in the state of Texas,” Patrick said at the time, “letting them know that they should not move forward on the President’s guidelines.”

With this and so much more to Patrick’s credit, he is truly a worthy recipient of this year’s Genitalia Fixation Award. Thank you Stonewall Democrats of San Antonio for recognizing Mr. Patrick’s towering intolerance.

The real advocates for equality

The keynote speaker for the event will be trans activist Lou Weaver. The banquet is Stonewall’s largest fundraiser of the year and the community is invited to attend.

The trial has begun in San Patricio County, Texas for a man accused of raping and shooting a teenage lesbian...