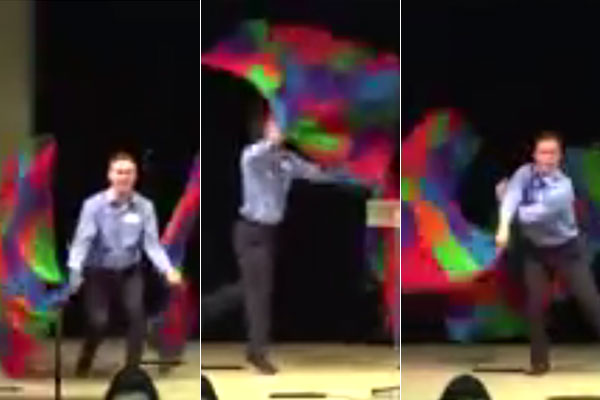 Ex-gay flag dancer Derek Paul performing at an anti-LGBT conference in Ft. Worth on November 17. (Video captures via YouTube)

“I have come to begin worshiping God with flags over the past two years, teaching in churches, conferences, art festivals and even making them by request,” the dancer, Derek Paul, wrote on his Facebook page. “I have found that churches and conservative groups have been the most supportive of my expression in the arts than anyone.” The video of Paul’s dance at the conference has gone viral on social media.

The event was presided over by David Pickup, an ex-gay psychotherapist originally from California. The featured speaker, who appeared via video hookup, was Texas State Rep. Ron Simmons (R-Carrollton), who authored of some of the unsuccessful bathroom bills submitted during the last legislative session. In 2008, MassResistance was named an anti-LGBT hate group by the Southern Poverty Law Center. Earlier this year, NBC News reported the group distributed a flier, “The Health Hazards of Homosexuality,” at the Values Voter Summit in Washington, DC, an event at which President Donald Trump spoke.

In his remarks to the conference, Paul, the ex-gay dancer, spoke of the LGBT teens he encountered in high school. “I was in the competitive cheerleading scene for 11 years. I studied fine arts at a fine arts high school,” he said. “I know what it’s like. I saw it up close and personal super early. I got to see what happened to them when they came out, before and after. I’m sorry it happened to them, and, if you are watching me. I am so sorry. But I’m praying for you.”

Two live performances of the National Theatre of Great Britain's production of the Stephen Sondheim musical, Follies, will be screened...