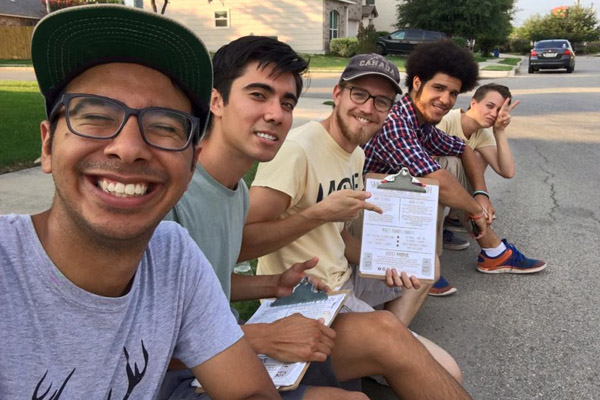 Members of Move San Antonio registered voters ahead the recent municipal election. They will join the Stonewall Democrats, the League of Women Voters and Battleground Texas to register voters at Pride events on July 1. (Photo: Facebook/MoveSanAntonio)

The Stonewall Democrats of San Antonio have organized a group of over 45 volunteers from four local civic organizations to register voters during the Pride Bigger Than Texas Festival and Parade on Saturday, July 1.

The volunteers come from the membership rolls of the Stonewall Democrats, the League of Women Voters, Move San Antonio and Battleground Texas.

In an email to volunteers, Kristian Carranza Thompson of Battleground Texas quoted newly-elected San Antonio Mayor Ron Nirenberg, who told the San Antonio Current, “We must unite the community to prevent bad laws from being signed at the capitol during the special session. Whether that’s individually testifying against a bill, local business outreach . . . whatever we have to do. Discriminatory legislation is bad legislation.”

“In order to elect representatives likes Ron Nirenberg who vote in favor of pro-LGBTQ city policy, we need to register voters. Texas is not a red state, it’s a non-voting state — and there is an ocean of people who need to register to vote and learn about the issues that affect them everyday,” Thompson wrote in the email.

To be eligible to vote in Bexar County, you must:

Chris Forbrich, co-chair of the Stonewall Democrats, told Out In SA he was impressed by the LGBT community’s political engagement during the city’s recent municipal election. He added that political power is only achieved when everyone votes and the first step is voter registration.

In an interview for a previous article on the Lavaca neighborhood, resident Suzanne Martinez expressed a certain nostalgia for the...