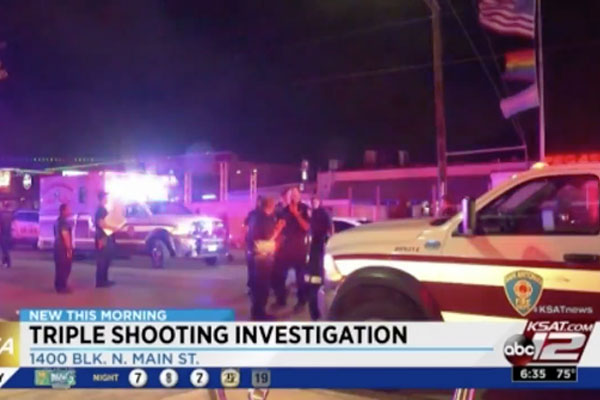 Civic and community leaders are offering words of support and condolence to the city’s LGBT residents following the shootings at the Pegasus nightclub during the early morning hours of October 8.

At a press conference on Monday, Police Chief William McManus said gunshots, which rang out about 1 a.m., were the caused by an angry patron who was thrown out of the club and returned with a gun. Three people were hospitalized with non-life threatening injuries after the suspect fired shots into the crowd standing outside.

In an announcement on Facebook, Robert Salcido, executive director of Pride Center San Antonio announced, “In light of last night’s shooting incident, we will have volunteer crisis counselors onsite today from 2 p.m. to 6 p.m. We understand that incidents such as this can bring up emotions from past experiences and past trauma. Stop by The Center if you need some support.”

“I am deeply saddened by the events that unfolded early this morning near North Main and Evergreen. The community has worked tirelessly to make ‘The Strip’ a welcoming, safe space for everyone, and such incidents will not deter us from that goal. I pray the three victims make a speedy recovery, but real healing begins with action. We need to seek out the common ground within our interactions instead of hastily resorting to hate and violence.

“Advocates and entrepreneurs have done an exemplary job of increasing safety on The Strip. My hat goes off to the security staff who effectively utilized the ‘active shooter response’ training they received after the tragic events in Orlando at the Pulse Nightclub. I have confidence SAPD will find the perpetrators and bring them to justice. Please contact (210) 207-SAPD with any tips that might lead to the capture of the culprit(s).”

Mauro E. Garza, the owner of the Pegasus nightclub, reached out to the owners of nearby businesses in a statement on Facebook, suggesting a meeting to address how such violence could be prevented in the future.

“Pegasus Night Club would like to start by offering our deepest heartfelt sympathies to those that were injured as well as all of our friends and family that were in the bar at the time of the incident.

“Although this was a random act of violence carried out by a disturbed individual. We will look into more safety precautions/measures in hopes of preventing another incident. We would like to invite our neighboring taverns/clubs to discuss how to create a safer place for our community, and look into any preventative measures that we all can take to ensure this never happens again.”

Chief McManus said the incident was not considered to be a hate crime. He added that detectives canvassed the scene this morning and continue to search for the shooter, believed to be a 40-year-old Hispanic man driving a red Nissan.

For the first time since it began participating in the survey, San Antonio has received a score of 100 on...