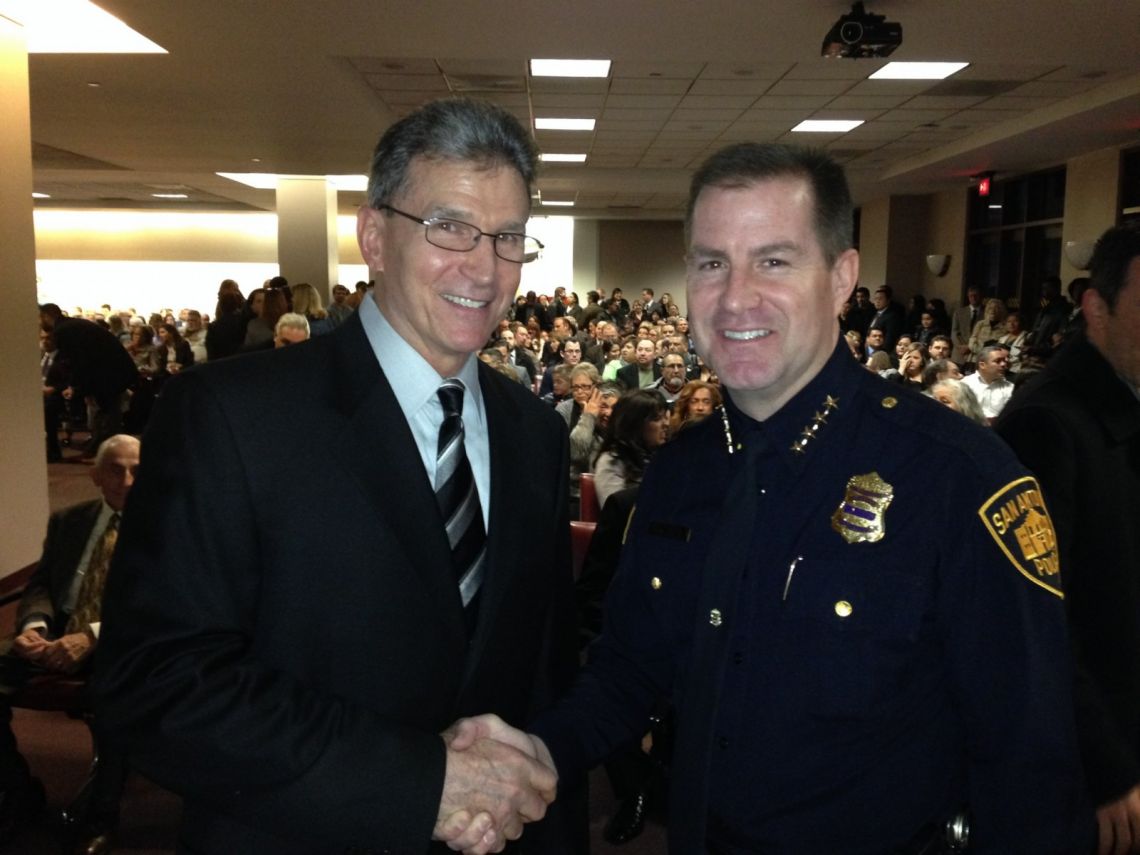 Anthony Treviño, the former chief of staff to outgoing police chief William McManus, was named interim police chief last December and began his new assignment January 1. Treviño, is a native San Antonian and an Air Force veteran who has been with the SAPD for 20 years. He started out as a patrol cop and worked his way up to deputy chief in 2011.

At a press conference announcing Trevino’s appointment, Chief McManus said, “I’ve worked closely with Tony for the last four years. As my chief of staff he handled the bulk of the day-to-day operations. He’s done a great job, and if there is anybody to lead the department at the beginning of the new year, Tony is the guy to do it.”

A search firm has been retained by the city to identify candidates to replace McManus, and Treviño has made it known that he’d like the job. The city manager has said no decision will be made until after the election of the new mayor and city council in May.

Chief Treviño spoke with Out in SA about his immediate plans to make the SAPD more responsive to the citizens of San Antonio.

Thanks very much for taking time to talk to us. While you are not new to the force you are new to the job. How are your first few weeks going?

It’s been an incredible experience so far. It’s been everything I imagined and more. One of the things that’s been helpful is that I was Chief McManus’s chief of staff the last four years. So we were locked at the hip on a lot of issues and a lot of things within the department and within the community. It’s made the transition a lot easier. However, it’s a little bit different when it’s your head instead of the other guy’s.

Chief McManus set a lot of precedents in terms of the SAPD’s relationship with LGBT citizens.  Is it your intention to keep programs he started including the LGBT sensitivity training for cadets and appointing an SAPD liaison to the community?

Absolutely. Absolutely. One of things we’re working on is the fundamental responsibility of police protecting people from harm. We’re teaching a block of in-service to our officers and the fundamental premise of it is treating people with dignity no matter what their walk in life. It doesn’t make a difference if they’re a victim of crime or suspected of being part of a crime, we have a fundamental responsibility to protect people from harm.

Though now much-improved, the Park Police have had a rocky history involving physical abuse of gay men arrested for lewdness in public parks. When we interviewed Chief McManus last fall he said he was open to adding the Park Police cadets to the same LGBT sensitivity training SAPD cadets get but he never had a chance to act on it. Would you be open to this idea as well?

Definitely. As a matter of fact, I’m glad that you brought that up because I talked to Captain [Raymond R.] Castro [head of the Park Police] about incorporating sensitivity training into the curriculum. We’ve already set the curriculum for this year, but I want to make sure it’s priority number one for next year. In the interim, we’ll try to put together some training videos to talk about the area of sensitivity. We must understand that we’re not all the same, everybody’s different, and we must remember our fundamental responsibility of protecting people and treating them with dignity.

Would you march in the Pride parade if invited to do so?

Yes, I would, and the reason why is that we need to create a community that’s about inclusion. Everyone should see our entire community as being unified.

Assistant Chief Jose Banales has been the SAPD’s liaison to the LGBT community for several years. There were media reports that he might be taking a new position out of state. Is he still on the force and if not have you considered who might replace him as the LGBT Liaison?

He’s still with the department–at least in the interim he’s not going anywhere. But if he were to leave that would be one of my top priorities, to make sure we had a liaison established.

I notice that you’ve started a blog, SAPD: Blue Line Times, that discusses some of the communications changes you’ve set for the department, among them to improve the SAPD’s media services, update the website, and work more with local media. Can you describe some of the changes this will bring about?

I think we all realize that the way society communicates has changed. And so it would irresponsible for me as a chief not to recognize that and adapt and change. That’s why I established the blog.

If you look at our Facebook page you’ll see why we’re one of the top five law enforcement Facebook pages in terms of followers. We also started an SAPD Facebook en Español to reach out to the Spanish-speaking community.

Recently, we kicked off NextDoor.com, a social-media website that ties communities together by letting neighbors communicate with each other and with the policemen who patrol their area.

I think one of the biggest things we need to be doing as an organization is communicating and we need to take advantage of every avenue because if we don’t then there’s members of the community who are not being included, and our efforts are about inclusion.

There’s a program for local Spanish-speaking citizens called Unidos, which media reports say you are starting. Can you describe what this program would do?

The Unidos program will be reaching out to Spanish-speaking citizens, because that’s a segment here in San Antonio that has sometimes been marginalized because of the barriers to communication. What we want to do is open up avenues with this community, many of whom come from South and Central America where their relation with the police is very different–one that is filled with mistrust and brutality. We want them to know that the police are here to help.

Another of your initiatives is to create a more open atmosphere at SAPD facilities. To that end, you’ve said you would have events like Coffee with the Chief and open houses at police substations. How often would they types of events occur and what would be presented at those gatherings?

The open houses would take place quarterly. I view the substations as the people’s substations, not the police substations. We want to introduce residents to some of the officers that work in the area. We’ll talk about crime prevention and what we do as an organization to solve crimes and how the community can help.

You’ve also said that you’d like to meet with people from diverse communities.

I’ve met with several different groups and look forward to meeting more. It’s key to make sure that we are proactive in establishing those relationships early, because a moment of crisis is not the time to establish a relationship with a community. We need to do that upfront. It’s something I look forward to.

I think Chief McManus did an incredible job He opened my eyes and showed me the value of relationships. That’s why I want to continue to focus on those while I’m new in my tenure.

Are there any other major initiatives you’re planning?

In January, we started the Life Skills Academy, which is a partnership with the Boys and Girls Clubs. Our first pilot project started at the Eastside Boys and Girls Club off of Martin Luther King Boulevard. We’ve got a group of 20 at-risk kids who will get mentoring. Our goal and focus will be to teach them life skills, the value of education, how to present themselves, and the importance of making a good first impression. If we get positive results we’ll see about expanding the program. We want to reach out to the kids while they’re young, before they become consumers of law enforcement but in a negative way.

You’ve said that you would like to take the job of chief on a permanent, full-time basis and have put your name in the running. Why do you think you’d be the best choice for the job?

People ask me why I would want to be police chief given all the stress and expectations, with all the things going on throughout the country, and with everything we have going on internally with contract negotiations. It’s a real simple answer for me. I grew up here in the community. I grew up in the department, and I feel I know the culture of both the community and the SAPD.

I love San Antonio. It’s where I grew up, it’s where I’m raising my family. I don’t think you can instantly produce a relationship with the community. I don’t care who is brought in as a candidate, I don’t think they’re going to have the relationship and caring and the feelings I have for the SAPD and, more importantly, for the city.

The Austin American Statesman is reporting that a probate judge in Travis County, Texas has ruled that the state's ban...