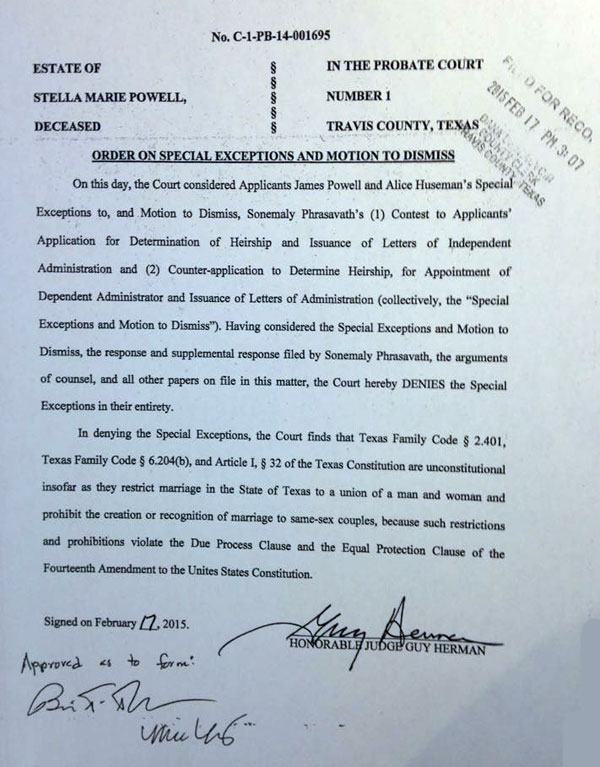 The Austin American Statesman is reporting that a probate judge in Travis County, Texas has ruled that the state’s ban on marriage equality is unconstitutional.

According to the American Statesman’s report:

[Judge Guy] Herman ruled as part of an estate fight in which Austin resident Sonemaly Phrasavath sought to have her eight-year relationship to Stella Powell deemed to have been a common-law marriage. Powell died last summer of colon cancer.

Travis County Clerk Dana DeBeauvoir said she will be conferring with Herman and county lawyers to determine the impact of the ruling.

“I am scrambling, trying to find out if there is anything I can do. Right now, I think it’s no, but we are checking,” said DeBeauvoir, who in the past has said that she is ready to begin distributing marriage licenses to same-sex couples as soon as allowed by the courts.

Shortly after the ruling, American-Statesman reporter Chuck Lindell tweeted: “Travis County will NOT issue same-sex marriage licenses today. Clerk says she is scrambling to meet with lawyers, but no for now.”

One year ago, Federal District Judge Orlando Garcia ruled that the state’s ban on same sex marriage is unconstitutional. That decision has been stayed awaiting a ruling from the U.S. Court of Appeals for the 5th Circuit in New Orleans.

In a Facebook post, reporter Joey Palacios of Texas Public Radio asked Rebecca L. Robertson, the legal and policy director for the ACLU of Texas, “Do we know what effect the ruling might have given there is a current federal stay.”