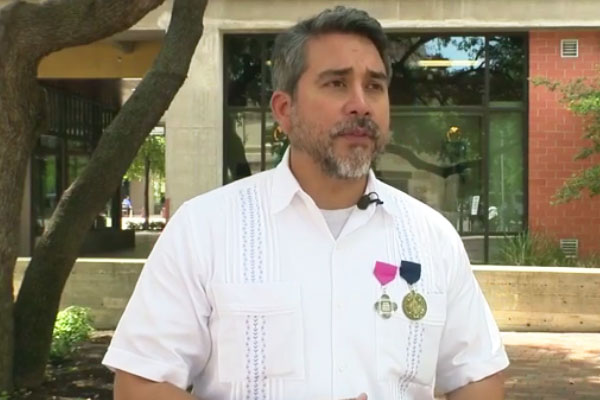 The medals are being sold to raise funds to install the crosswalks on Main Avenue at the corner of North Main and East Evergreen. Each medal sells for $15.

“We were trying to raise some money with Fiesta coming up. The tradition of doing Fiesta medals, we thought it would be a great way to raise money.” Treviño said in an interview with KSAT-TV on April 24. “I think ([the medal sale] has been very successful we’ve already raised over $10,000 so far.”

“I designed and funded a Fiesta medal to raise awareness and money for the crosswalk,” Treviño told Out In SA earlier this month when the medals first went on sale. 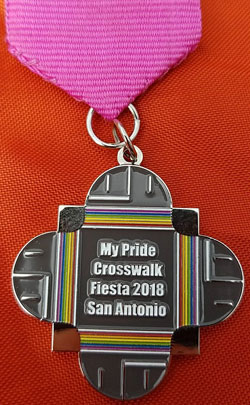 The total cost for the installation of the rainbow crosswalks is $40,000 with the city covering $20,000 of that amount and the LGBT community raising the balance from donations.

The plan to create the crosswalks originated in June 2017 when Treviño submitted a Council Consideration Request seeking the council’s approval. In August, the City’s Council’s Governance Committee approved a pilot program to have the crosswalks installed with the city covering half the cost and donations from the community covering the balance.

“The Main Avenue Strip has been the center of the LGBT community in San Antonio for decades,” Treviño wrote in the request. “It is the home to many LGBT owned businesses and the site of the annual Pride Parade. The addition of this crosswalk will affirm San Antonio is a place of acceptance and equality.”

The medal, which has a pink ribbon, depicts the rainbow crosswalks, along with the words, “My Pride Crosswalk – Fiesta 2018 – San Antonio.” They can be purchased at Luther’s Cafe, Sparky’s Pub, The Heat Nightclub, and the Knockout Sports Bar. Pride San Antonio is also selling the medals.

Treviño is encouraged by the brisk sales, so much so that he told KSAT, “We’re already prepping to get this installed soon.”

“The whole point of this is to bring awareness to show that we are a welcoming and inclusive community,” he added. “And I certainly don’t want anybody to think this is enough. This is really about taking steps in the right direction.”

Will Ada Vox Make It to ‘American Idol’ Top 10?

Originally published in the San Antonio Current. Y’all. Our girl might win this whole damn thing. If you haven’t been...