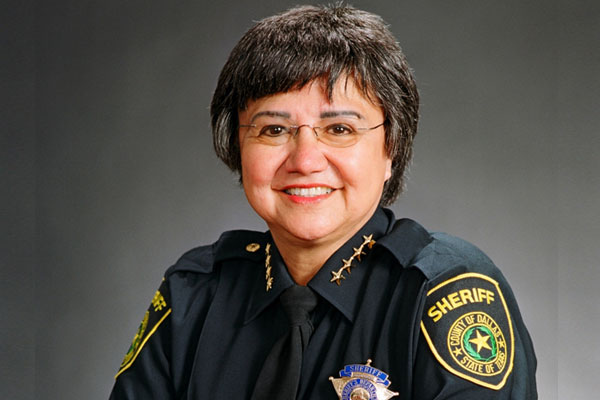 Dallas County Sheriff Lupe Valdez has made it official: She is resigning her office to run for Governor of Texas in the Democratic primary. Valdez’s announcement came just a week after news outlets in North Texas had prematurely reported her resignation ahead of a likely campaign. Her announcement on December 6 is the real thing.

Valdez, a native of San Antonio, is one of only a few female sheriffs in Texas, the only Hispanic female sheriff and the only openly lesbian person to hold that office.

There are six other candidates running for governor in the Democratic primary including gay Dallas businessman Jeffrey Payne.

Last month, Valdez told the Texas Tribune she thought it was time for a change in the Republican-controlled state house. “Too much of one thing corrupts, and I’m a strong believer in a two-party system,” she said. “I’m hoping that enough people are seeing that too much one-sided is not healthy for Texas.” Valdez is one of eight children born into a family of migrant farm workers. She was raised in San Antonio where she attended Thomas Jefferson High School. She earned a Master’s degree in Criminology and Criminal Justice from the University of Texas at Arlington and proved herself in the U.S. Army where she achieved the rank of Captain.

Valdez worked at various jobs in law enforcement including being a jailer at county and federal prisons. She went on to jobs as a federal investigator for the General Services Administration, the U.S. Department of Agriculture and the U.S. Customs Service. In 2002, she was made a senior agent with the Department of Homeland Security.

In 2004, Valdez beat out three opponents in the primary election for Dallas County Sheriff. In the general election, she was endorsed by the Gay & Lesbian Victory Fund and beat her competitor by a margin of 18,000 votes. She went on to serve four terms as sheriff

In announcing her candidacy, Valdez said, “Like so many hardworking Texans, I know it’s tough deciding between buying food, finding a decent place to live, and setting aside money for college tuition. Opportunity in Texas ought to be as big as this great state, but it is out of reach for far too many, that’s why I’m running for Texas governor. I’m a proud Texas Democrat. I believe good government can make people’s lives better, and I intend to do just that.”

There is no shortage of holiday cheer in San Antonio's LGBT community as groups and clubs all over town schedule...