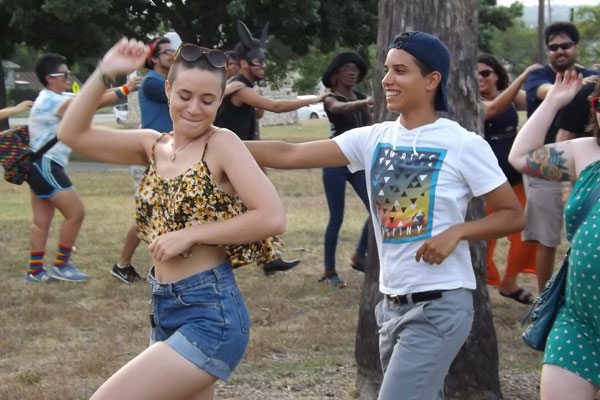 Dancers form a conga line in the park across from Mayor Taylor's home during the Gay Pride Flash Mob Dance on May 27. (Photos by Sam Sanchez)

Almost one hundred people from the LGBT and allied community brought their protest to Mayor Ivy R. Taylor’s home for 45 minutes of joyous dancing in Dignowity Park on the evening of May 27.

There were no speeches or angry words. Just the sound of music and laughter — all of which took place across the street from the mayor’s front door.

The event, dubbed “Gay Pride Flash Mob Dance,” went off like clockwork. The playlist included songs by Madonna, Lady Gaga, and a long string of dance hits from yesterday and today.

There were moms and dads, grandmas and granddads, kids in costume, people of every color and persuasion joined in one purpose: To show Ivy Taylor that the vibrant LGBT community would not be ignored no matter how much she tried.

Shortly before the dancing started, three SAPD officers showed up to say they would hover around the event to “make sure nobody bothers you.” Several police cruisers circled the park. Dancers boogie in Dignowity Park across the street from the mayor’s house on North Olive Street.

Young and old joined in a conga line that coiled its way to the edge of the park where the dancers lined up and faced the mayor’s home with breakout soloists vogueing, tumbling and jumping to the beat of the music. Passersby in cars honked and waved at the dancers.

Rosey Abuabara, a mother of three with a gay son and two gay brothers, told Out In SA she organized the event because, “I thought we could send a strong message to Ivy Taylor because she is not friendly with the LGBT community.” Abuabra is right. Despite having formed the Mayor’s LGBT Advisory Committee and approved the creation of the Diversity and Inclusion Office, the impression is that Taylor only begrudgingly accepts the concept of LGBT equality.

In 2013, when she was still a city council member, Taylor voted against the city’s nondiscrimination ordinance, angrily citing her religious convictions. Two years ago during the campaign for her first complete term, she referred to the NDO as a “waste of time.”

All of this has made the mayor an unpopular figure within the city’s LGBT community as evidenced by the boos and jeers she received when she appeared at last summer’s vigil for the victims of the Orlando shootings.

During this latest campaign for mayor, Taylor ignored invitations to appear before LGBT groups insisting she had scheduling conflicts. She also recently told the members of her LGBT Advisory Committee that while she would not stand in way of the creation of an LGBT resource center for the city, she opposes spending taxpayer money on it because it is a “controversial issue.” On June 10, Taylor faces off against Ron Nirenberg in the runoff election. Nirenberg recently said, “We deserve a city that treats everyone fairly whether you’re transgender, bisexual, lesbian, gay or straight or whatever your definition, you deserve to be treated fairly by your city government.”

“There are a lot of reasons I don’t like her,” Abuabara says of Taylor. “The dance event is a fun way to get under her skin.” It was also the perfect catharsis for the community — dancing to cure the itch of Poison Ivy (Taylor).

(Check out our Facebook Album with more photos from this event.)

The runoff election is scheduled for June 10. Early voting begins on Tuesday, May 30 and ends on Tuesday, June 6. Use this link for more information about the election

By Alexa Ura, The Texas Tribune May 26, 2017 Editor's note: This story has been updated throughout. The Texas Legislature...