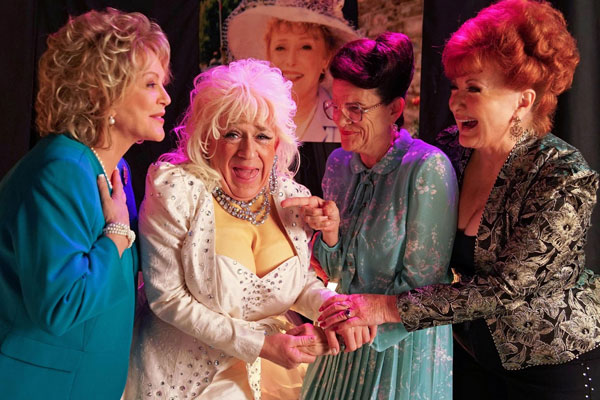 Writer Del Shores once again brings together the zany characters of conservative Winters, Texas in his hilarious new film, “A Very Sordid Wedding,” which makes its Texas premiere in San Antonio at The Playhouse on April 15.

The original film, dubbed “a black comedy about white trash,” dealt with coming out in a conservative Southern town filled with a crazy quilt of personalities including Leslie Jordan as a Tammy Wynette impersonator.

‘Sordid Wedding’ brings back the cast of characters, who reside in the Southern Baptist town of Winters, in the weeks following the U.S. Supreme Court’s same-sex marriage equality ruling where not every citizen is ready to accept it. The cast of “A Very Sordid Wedding” (Photo via Twitter)

The use of comedy to explore LGBT issues is a hallmark of Shores’ work. “Bigoted religious freedom, marriage equality and cultural acceptance are all explored with Del Shores’ trademark approach to using comedy and his much beloved ‘Sordid Lives’ characters to deal with these important current social issues and the very real process of accepting your family for who they are instead of who you want them to be,” a press release explains.

Shores has written, directed and produced for film, network and cable television, and theater. His most recent film, an adaptation of his award-winning play, “Southern Baptist Sissies,” won fifteen film festival awards. His film, “Blues For Willadean,” is an adaptation of his play, “The Trials and Tribulations of a Trailer Trash Housewife,” starring Beth Grant, Dale Dickey and Academy Award-winner Octavia Spencer. Shores was also a writer for the Showtime hit, “Queer as Folk.”

“Not a day goes by where someone doesn’t write me asking me for more ‘Sordid Lives,’ Shores said in a statement. “So many of my LGBTQ fans, of all ages, have come out to their folks by showing them ‘Sordid Lives’ because the humor helped them share their own story, I am excited to bring my characters up to July 2015 where they are hit with the reality of Texas having full equality. I wanted to contrast affirming churches and organizations like Faith In America with the hypocritical bigotry that is still being spewed from pulpits represented by the anti-equality rally in the film.”

“A Very Sordid Wedding” premiered in Palm Springs on March 10. After it’s screening in San Antonio, the film will be shown in Waco on April 17, Austin on April 19 and on to the USA Film Festival in Dallas on April 21.

“A Very Sordid Wedding,” Saturday, April 15 at 7 p.m. at The Playhouse, 800 W Ashby Place. There will be a post-screening Q&A and meet-and-greet with writer/director Del Shores and producer Emerson Collins. Tickets: General Admission $10. Q&A and Screening: $20 (includes complimentary beverage). Use this link to purchase tickets.

On, Wednesday, March 29, the Texas House State Affairs Committee had a hearing on House Bill 3859 which would allow...