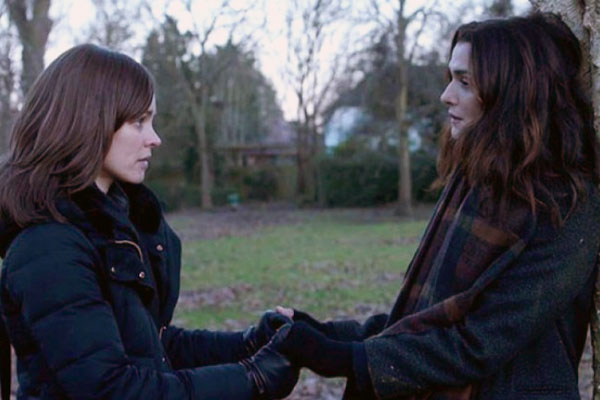 After earning an Oscar this year for his compassionate foreign-language drama A Fantastic Woman (Una Mujer Fantástica), Chilean director Sebastián Lelio makes his American film debut with Disobedience, a seductive and mature love story between two women with ties to an Orthodox Jewish community in London.

Esti Kuperman (Oscar-nominated actress Rachel McAdams) and Ronit Krushka (Oscar-winning actress Rachel Weisz) have been close friends since childhood. Growing up together in the synagogue where Ronit’s father was a well-respected rabbi, their lives parted ways as young women when Ronit “disappeared” to New York to become a photographer.

Many years later, Ronit finds herself back in London to pay her respects after her father dies, although she admits she was never as close to him as he was to his students. Early on, Ronit is surprised to learn that Esti has married their mutual childhood friend Dovid (Alessandro Nivola), one of the rabbi’s prodigies. Ronit assumes it is a marriage of convenience, however, since she knows Esti, whom she has been intimate with in the past, has always been attracted to women.

Ronit’s arrival — you guessed it — reignites something inside Esti that she has kept dormant for a long time. As the two women begin to re-embrace their passion for one another, the Jewish community around them begins to stir. Already having an unfavorable opinion about Ronit for leaving her father and her faith behind, those closest to the rabbi question her motivation for returning to a society that ostracized her long ago.

Adapted from the 2006 novel of the same name by English writer Naomi Alderman, Disobedience is an absorbing, well-written narrative that explores the conflict between free will and religious obligation effectively and in a thought-provoking way. In Ronit, Esti and Dovid, Lelio introduces audiences to a cast of three-dimensional, adult characters who are given choices, have conversations and never overdramatize the uncomfortable situation they find themselves in. In a less capable director’s hands, a film like this would likely amount to a worn-out love triangle, but Lelio identifies the nuances within the relationships and allows them to breathe on their own. He also avoids turning the outspoken Ronit into a she-devil stock character who waltzes into Esti’s life to cause trouble like some biblical serpent — especially since the film opens with her father sermonizing on the “desires of the beast.”

By Cassandra Pollock, The Texas Tribune May 16, 2018 In September, the Texas Capitol was finally starting to calm down....