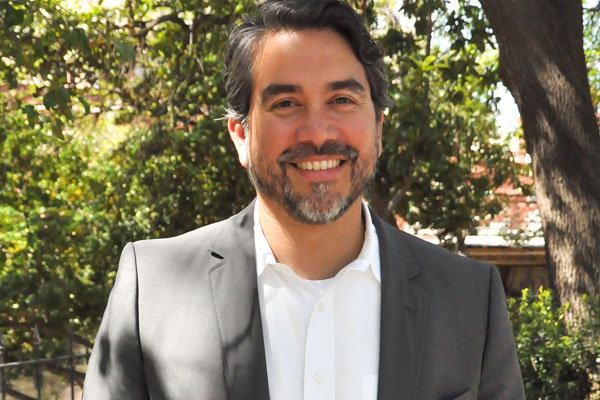 District 1 City Councilman Roberto C. Treviño was appointed by the City Council last December to fill the unexpired term of Diego Bernal, who left the office to run for the State Legislature. Treviño is now in the process of running for reelection in the May 9 municipal election.

On March 22, the Stonewall Democrats of San Antonio endorsed Kurzon for the office because he was the only candidate to show up for the group’s endorsement forum. Treviño reached out to Stonewall to explain that a communications mixup prevented his attendance.

District 1 stretches from south of downtown to Loop 410 on the north. It encompasses some of the city’s most popular “gayborhoods” including Southtown, King William, Lavaca, Monte Vista, Alta Vista, Tobin Hill and the area around Olmos Park. It is home to numerous LGBT businesses, the Main Avenue Strip, and the Pride Center.

Out In SA invited Councilman Treviño to sit down for an interview to let the community know where he stands on the issues.

Councilman, thanks for taking time to talk to us. You’ve been on the job for about four months since your appointment. How are you finding the experience?
It’s great. It’s a real joy to be an active participant in policy-making for our city and representing District 1. I’ve really enjoyed it.

There were 14 applicants for the job. Why do you think the City Council appointed you?
I think we have a lot of good people in our city. I feel very privileged to have been chosen. I would say that the case I presented for myself was as someone who will be thoughtful and who will take time to understand the process, be inclusive, and respect people and their access to city government. Words like “community” and “respect” are the main points of why we do what we do.

Most of our questions to you today have to do with LGBT concerns. However, we have two questions about issues that are in the headlines.

What are your thoughts on Uber and Lyft leaving the city?
As you may know, I led the negotiations on amending the ordinance. My hope was to keep them in town. I still believe that they will stay. What they’re saying right now may be rhetoric but we must take them seriously. My door is always open to them. We negotiated for quite a while, over a month, with city staff and many people involved.

At the time we were negotiating with Uber, they felt pretty good about the negotiations, I think we all did. We included them in helping craft the language, so that there was clarity. We feel that it was a good amendment, something that was workable; not too dissimilar than the one from Houston, where they they operate.

They then decided to try a different approach–to go through a state legislative process. Our amendment addressed public safety by keeping the fingerprinting (of drivers) but allowing a grace period, which they seemed okay about. The big thing for them (now) is not having fingerprinting and they’re waiting on the state to come through on that for them.

It’s evident that they want to stay. I want them to stay. It’s not about protecting a company, it’s about trying to give our city choices in transportation modes. We understand there’s a benefit in public safety by having them operate here. There’s a correlation in the drop of drunk-driving cases. My hope is that come April 1, they won’t want to leave.

How do you feel negotiations are going with fire and police unions?
I haven’t had a chance to sit in on those negotiations but the reports I’ve seen seem encouraging. I think there is progress. I think the latest offer the city’s put on the table gives them a whole lot more choice. They’re allowed to structure their health plans to fit their needs.

There’s still some concern about the benefits themselves and how much reduction we’re talking about. There’s a range in the benefits. The average civilian city employee is averaging about $7,500 in healthcare costs while the average police officer is twice that.

Not every police officer is at that mark, but that’s where the average lands. It’s a huge range. It can be as low as $10,000 but goes to over $20,000 on the other end of the spectrum. It’s that range we’re trying to get under control.

Ultimately, we’re going to have to address skyrocketing health care costs that are creating a situation that’s quickly pushing us over our limits. We need to maintain some fiscal responsibility so that we can continue to grow the city and maintain our credit rating.

In September 2013, the City Council voted to amend the city’s non-discrimination ordinance to add protections based on sexual orientation, gender identity, and veteran’s status in city employment, public accommodations, housing, city contracts and appointments to boards and commissions.  Had you been on the City Council at the time, would you have voted for the ordinance?
I would have been in support of the NDO absolutely. I will say this, the NDO was crafted in District 1 and I intend to continue championing that ordinance. The staff that was around to help craft that language is still a part of my staff. I’m very fortunate to have them because they’re intimately aware of the issues.

Earlier this month, Mayor Ivy Taylor said she’s appointing a human-relations liaison who will handle complaints made under the city’s non-discrimination ordinance and plans to establish a Department of Diversity and Inclusion. The proposal would require approval by the City Council. Have members of the City Council been briefed regarding the mayor’s proposal and what do you think its chances are of passing a City Council vote?
We haven’t been briefed just yet. I’m encouraged by it but I think I need more time to have an understanding on how that proposal would work. I’d like to take a good look at it. I’m encouraged–it could be a good thing.

Do you think the mayor will have time to present and get this proposal passed before the end of her term?
Is it possible? Yes.

One thing missing from the non-discrimination ordinance was city-wide employment non-discrimination for all protected classes. Do you think this is something that can be realistically pursued by the City Council and would you support it?
Equality is a very huge issue. I see it as something that needs to have a comprehensive approach because it’s the essence of our democracy. We certainly want to champion [a city-wide ENDA]. It’s a nuanced question and I support the spirit of it. I would need to dig down to see what we can do through the City Council. How far-reaching can we be? What can we do?

In 2011, the San Antonio City Council adopted a budget that included granting domestic-partner benefits to unmarried city employees in same- and opposite-gender relationships and their legal dependents. If you had been on the city council at the time, would you have supported this measure?
Oh, yes. Absolutely.

There are hate-crime statutes on the books but many critics say that hate crimes in the city and across the state are under-reported. Do you support stronger enforcement of state and federal laws by the San Antonio Police Department to protect LGBT persons and other victims of hate crimes?
Public safety is an important responsibility we have on council. I certainly hope to address that and do my part to make sure we have the proper enforcement. The fact that there’s potential for the under-reporting of hate crimes is disturbing. It’s a major concern and I would like to work with our public-safety officers to have a better understanding of what we can do to be proactive.

LGBT sensitivity training is presently conducted for cadets at the San Antonio Police Academy and to all Bexar County employees. Would you support expanding such training to all city employees?
Yes–if that’s a need. I only say that because one of the great joys of working with staff here at City Hall is that there’s a lot of good people here. I realize we have many city departments and many people working for the city. This is something that could be of benefit to how we treat people.

Do you support a line item in the city budget to fund HIV/AIDS medical treatment, prevention and/or supportive services?
I haven’t yet been through the budget process — that will be coming up after May. I would be very supportive of funding something like this. It’s important for the health and welfare of our community. I just don’t know yet how that process works.

Would you participate in the Pride Parade if you were invited?
Yes.

How about speaking at other LGBT events such as the Stonewall Democrats?
Yes. Unfortunately, we missed [the Stonewall candidate forum] last weekend. That was a clerical mixup and I certainly apologize for that.

Any final words for constituents?
We’re real proud of the city’s direction and I’m proud to be here. I hope to continue the good work. My goal is one of creating a culture of collaboration. I want to be inclusive. I want to provide people with access to government. I want people to feel there’s a very transparent process. I want my constituents to be along for the ride. There’s so much going on and there’s a lot of opportunity to work together and do good things to move our city forward.

A drag queen and a gay club owner raise their son then face a crisis when the boy grows into...