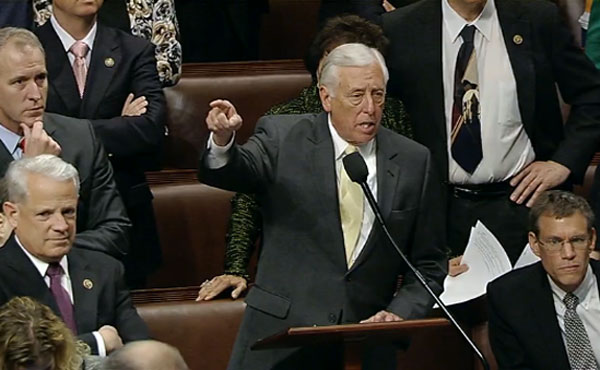 Rep. Lloyd Doggett (D-Austin-San Antonio) is speaking out about the tactics used by House Republicans in a May 19 vote to retain a provision embedded in a defense bill that could potentially allow discrimination against the LGBT employees of federal contractors in the name of religious freedom.

“Earlier today, not only did House Republicans vote against equality, certain Members switched their votes secretly,” Doggett wrote in an email to Out In SA. “I have never seen this occur in all my years in Congress.”

The embedded language states religious corporations, associations and institutions that receive federal contracts can’t be discriminated against on the basis of religion.

Rep. Sean Patrick Maloney (D-NY), who is openly gay,  initially proposed an amendment that would have nullified the anti-LGBT language in the bill.

“When Republicans added a provision to the National Defense Authorization Act that allows federal contractors to discriminate against LGBT employees, my Democratic colleague, Rep. Patrick Maloney offered an amendment that would strip the anti-LGBT provision from the bill,” says Doggett. “Several Republican Members initially cast votes in favor of Rep. Maloney’s amendment, and as the vote came to a close, the tally was 217-206, in favor of equality.  It seemed we had won.  But the Republican Leadership refused to end the vote on time.”

“Instead, after it became clear the amendment would pass, some Republicans switched their votes, quietly from the back benches of the House Chamber. This is contrary to the established practice that requires vote-switching to be done in person at the House Clerk’s desk. Republicans held a two-minute vote open for nearly eight minutes to enact their discriminatory agenda. The final result was a 212-213 vote, with inequality prevailing,” Doggett explained.

According to a report in The Hill, “Democrats accused Majority Leader Kevin McCarthy (R-CA) of leading the Republican operation to flip votes . . .  ‘I don’t think I’ve ever seen anything that craven and that ugly in my time in Congress,’ Maloney added.”

The Hill goes on to report, “The decision to leave the clock open marks a sharp break under [House Speaker Paul] Ryan, who assumed the Speaker’s gavel with vows to return to regular order and an insistence on obeying House rules, including the use of the vote clock.”

Doggett describes the events of the day as “truly shameful,” adding that he will continue to fight for LGBT equality.

Bob the Drag Queen to Take Over the Heat in June

Unless you’ve been living under a rock, by now you probably know that Bob the Drag Queen was crowned “America's...