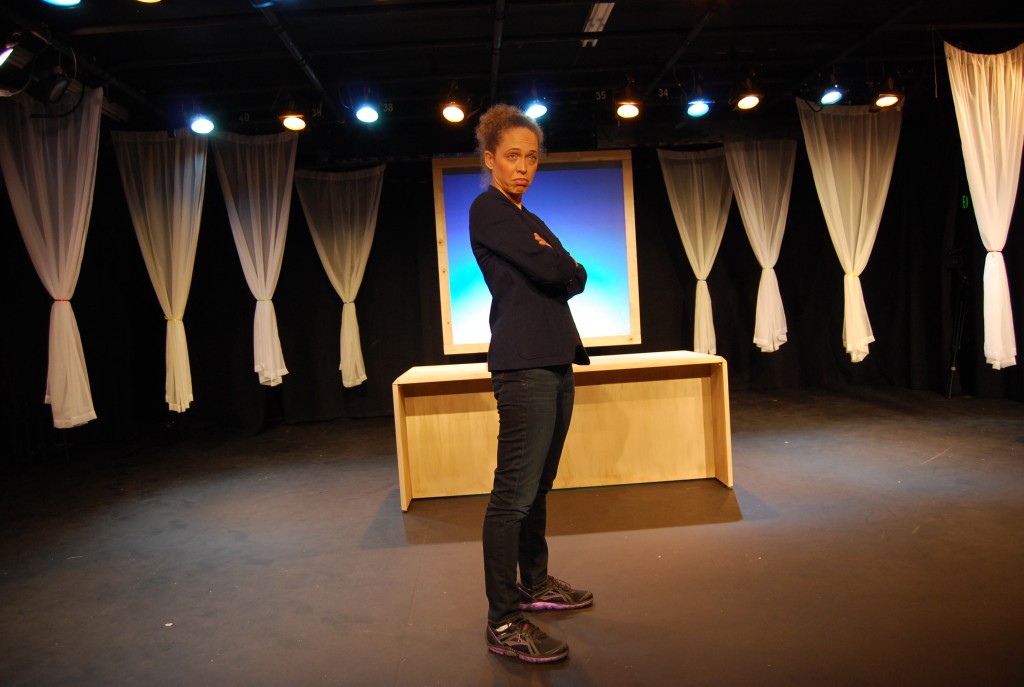 Fanshen Cox DiGiovanni, author and producer of One Drop of Love. Courtesy image.

Fanshen Cox DiGiovanni brings her multimedia, one-woman show One Drop of Love to the Carlos Alvarez Studio Theatre at the Tobin Center for the Performing Arts this weekend. Produced by Ben Affleck, Matt Damon, and Cox DiGiovanni, the play is an autobiographical work intertwined with a conversation about the historical and contemporary construction of race in America.

One Drop of Love was originally presented as the actress and playwright’s M.F.A. thesis and has been on the road since Affleck and Damon first took notice and jumped onboard. Cox Digiovanni cites one-woman shows by Anna Deavere Smith, Sarah Jones, and Whoopi Goldberg as models and inspiration.

The plot revolves around Cox DiGiovanni’s estranged relationship with her father and her efforts to reconcile. Cox DiGiovanni’s mother identifies as white, and her father is Jamaican-born. She never saw her father interact with white people after her parents divorced. She fell in love with and married a European man; her father never came to the wedding.

The play’s title, One Drop of Love, is a reference to the “one drop rule,” which considers anyone with any traceable amount of black ancestry as black, regardless of skin color. It also emphasizes what Cox DiGiovanni believes is missing from current discussions on race in America. In a recent phone interview, Cox DiGiovanni explained, “I think a lot of us lack the empathy and compassion and love in approaching issues of race. I think that we all get very defensive about it and understandably so, especially those that have been oppressed racially in this country.”

With so much violence and unrest this past year, One Drop of Love is a timely piece, encouraging a much-needed dialogue between people of different backgrounds and identities.

I asked Cox DiGiovanni if she had ever tried “passing” as white. For millions of African Americans and individuals of mixed racial backgrounds, “passing” has at times been seen as a viable option to avoid discrimination and allow for the possibility of a better life. Immediately, I worried whether I had asked an inappropriate question. She responded with laughter. “Yeah–especially when I first moved to Hollywood,” she said. “I’d literally have to ask my agent whether they had submitted me as white or black when they’d call me with an audition. And that would literally determine how I’d wear my hair, how I’d even speak at an audition.”

But then she revealed a much more complex and disturbing reality. “I’m confronted with that sort of thing all the time, because even if I chose not to actively, or consciously ‘pass,’ people ‘pass’ me,” she explained. During a recent house-hunting endeavor, she and her husband approached a resident in one of the neighborhoods they were interested in.

“I went and spoke to a man that was Latino, and I ended up speaking to him in Spanish because he didn’t understand what we were saying in English. We asked ‘So, do you like the neighborhood?’ and he said ‘Yeah– it’s much better now because all the negritos have left.’ So, even if I chose, in every way that I could, not to be ‘passing’– he sees me as something different than what I am.  And I actually liken this often to the queer movement, the transgender movement, you know, what it feels like when you don’t appear on the outside the way you feel on the inside.”

Cox DiGiovanni believes that the search for identity, and how it affects our families, is a universal experience.

“You could easily liken the struggles that I’ve had with my relationship with my dad to something like having to ‘come out’ to a parent,” she said. “In my case, it was that here I was, wanting to please my father and have a better relationship with him than I had growing up, and yet, I ended up falling in love with a man who was born in Europe. And I was really afraid of what message that would send to my dad. Am I rejecting him as an African American? Am I rejecting African-American men, or Jamaican, pan-African men?  So in the same way, in the LGBT community, there is that sense of how do you remain true to yourself, allowing yourself to have a fulfilling life, while also being sensitive about your family? And can you come to a place of reconciliation where everyone can, as close as possible, live together and still love each other?”

Cox DiGiovanni says that she has been surprised by how well audiences have responded to the play, and considers it to be a “unifying” experience. Upcoming plans include a documentary film version and a potential television pilot. She is already at work on her next project, a look at trans-racial adoptions. “I’m very interested in being an artist activist, so whatever I do will include both social consciousness as well as art,” she said.

For her upcoming performance at the Tobin, Cox DiGiovanni recommends you bring a friend of “a different race.” “You’ll get a lot out of it,” she said laughing.