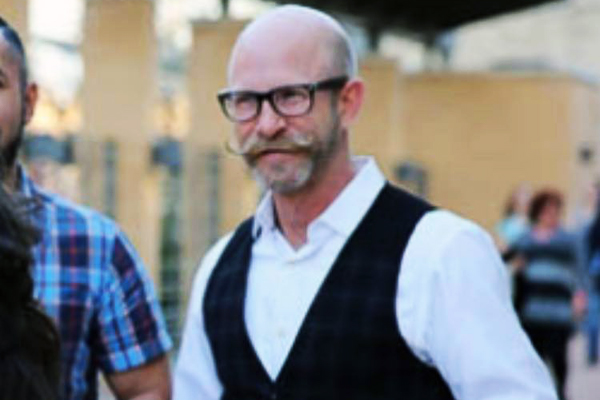 The board of directors of Fiesta Cornyation, billed as “the raunchiest, cheapest event of Fiesta,” have announced this year’s King Anchovy LII will be Jeffrey James, the proprietor of James Lawnmower Sales and Service.

James will preside over the Court of Insane Privilege during Cornyation performances slated for April 25 through 27 at the Charlene McCombs Empire Theater. The announcement of James’ ascension to the throne was posted to Facebook on the morning of January 27 and made with typical Cornyation flourish:

OYEZ OYEZ OYEZ, GUEY
After a week like this, you deserve some good news – yes Virginia, there will be a Cornyation. Raise your voices in wild acclaim and welcome our fearless leader for these dark times – King Anchovy LII Jeffrey James! Join us in April as we ride his royal highness’ formidable mustache to glory!

Cornyation is one of the most popular events held during Fiesta San Antonio, typically selling out all six of its performances each year. It has donated over $2 million to local charities over its life as a nonprofit organization, .

Cornyation raised a record-breaking $200,000 for each of the past two years. Last June, checks for $85,000 were presented to the San Antonio AIDS Foundation, BEAT AIDS and, for the first time, $10,000 to the Thrive Youth Center for homeless LGBT youth. Additionally, a Robert Rehm scholarship was presented to college student James M. Dold, who is pursuing a degree in a theater arts-related field. The scholarship provides $5000 a year for up to four years of study.

Tickets for Fiesta Cornyation go on sale soon and will be available through the Majestic/Empire Box Office, Ticketmaster, and The Fiesta Store. For more information: [email protected]

Check out our slideshow Backstage at Cornyation 2016.

A group of 14-to-18-year-old designers from San Antonio have created a role-playing video game whose superhuman characters represent people of...