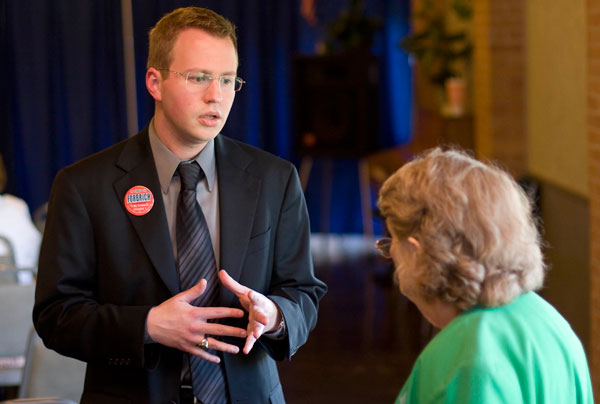 Chris Forbrich during his campaign for City Council District 1 in 2009. He's announced that he will apply for the interim appointment to the council seat left empty by Diego Bernal's departure. (Courtesy photo.)

Business owner and political activist Chris Forbrich confirmed to Out in SA that he will seek the interim appointment for the District 1 City Council seat left vacant by the departure of Diego Bernal.

Forbrich, who is openly gay, has made two unsuccessful runs for the District 1 seat, in 2009 and 2011. He said he was only interested in the interim position and would not consider running for office again.

“I’d like to help,” he says. “I have my business and live in District 1. I want help make sure we continue our focus on downtown and the center city.” His IT firm, Forbrich & Associates LLC, is headquartered in an historic office building on East Commerce.

The first time Forbrich ran in 2009, he challenged incumbent Mary Alice Cisneros, the wife of former mayor and HUD secretary Henry Cisneros. In that race, Forbrich proved remarkably adept at finding weak spots in Cisneros’ campaign and exploiting them.

It didn’t hurt that Cisneros was not a very adroit campaigner. She had to carry around a notebook to candidate forums so she could read her replies to questions she might be asked.

Forbrich also had the advantage that LGBT voters were disenchanted with Cisneros who never engaged with the community, a misstep considering District 1 has more queer neighborhoods (and voters) than any other part of town.

Although he lost the 2009 race, Forbrich garnered 40 percent of the vote — not enough to win but enough to convince him to run again, which he did in 2011.

During his second run, Forbrich told voters his grassroots campaign would focus on revitalizing inner city neighborhoods, the city’s next bond program and improvement of services to senior citizens. He faced four opponents in the race: Carolyn Kelley, Ralph Medina, Lauro Bustamante and Diego Bernal, who went on to win.

Stonewall Dems will host farewell to Nellermoe and McManus

The Stonewall Democrats of San Antonio are planning a farewell for two local officials who are considered solid allies of...