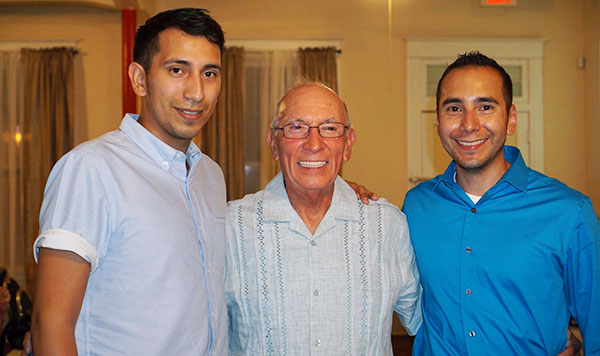 Former Bexar County Sheriff Amadeo Ortiz is speaking out in favor of marriage equality in a campaign by Texas for Marriage which is working to “to broaden the conversation about why marriage matters to all couples and their families.”

In a full page writeup on the Texas for Marriage website, Ortiz says his support for marriage equality is motivated by a very personal reason:

Sheriff Amadeo Ortiz has always been supportive of the LGBT community, and the issue became even more prevalent in his life when his son came out to him. “I knew in college that my son was gay,” Sheriff Ortiz said. “When he told me, I supported him in anything he wanted to do. ” Because he wants his son to be able to get married someday – in his home state of Texas – Sheriff Ortiz has become a fierce supporter of the freedom to marry.

Before becoming sheriff, Ortiz served four years in the Air Force, 27 years with the San Antonio Police Department and 13 years with the Bexar County Sheriff’s office where he was the jail administrator for six years.

Ortiz was elected sheriff in 2008. In that campaign he sought and received the endorsement of the Stonewall Democrats of San Antonio. During his election campaign, he marched in the Pride Parade.

In 2009, Ortiz became the first Bexar County Sheriff to appoint a liaison to the LGBT community naming Deputy Ino Badillo to the post.

Ortiz served as sheriff until 2012 when he was defeated in the election by current Sheriff Susan Pamerleau.

These days, Ortiz is playing the role of proud dad, pictured with his two sons on the Texas for Marriage website and supporting the cause of equality for his family.

Ultimately, the Sheriff wants everyone, including his children, to be treated with the respect and equality that they deserve. “I love all my children. And they should all have opportunities.” The only thing we disagree on is football,” Sheriff Ortiz laughed. “I’m a UT fan, they’re Aggies. But we still get along. Hook ‘em horns.”

A resolution that will be presented at the January 8 meeting of the executive committee of the Bexar County Republican...