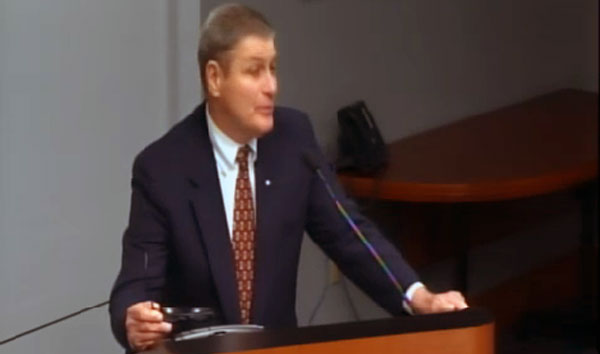 Jack M. Finger is chair of a Bexar County Republican Party committee that drafted a resolution to repeal the nondiscrimination ordinance and eliminate domestic partner benefits for city and county employees. (Photo: SATV)

A resolution that will be presented at the January 8 meeting of the executive committee of the Bexar County Republican Party urges the “repeal of our local governments’ pro-homosexual policies.”

The resolution, which was circulated to local GOP precinct chairs, denounces the passage of the nondiscrimination ordinance that was approved by the City Council in September of last year, saying that it uses taxpayer dollars to :

– Allow men to freely use the women’s restroom, locker rooms and changing facilities

– Subject businesses run by people of faith to criminal penalties and expensive lawsuits if they refuse to provide services that conflict with religious beliefs relating to homosexual behavior.

The resolution also seeks to roll back domestic partner benefits to city and county employees because they give “special rights to homosexuals” and because the benefits dishonor traditional marriage.

The document goes on to threaten local GOP officials and candidates who do not support the resolution saying, “if the preceding resolution does not occur . . . the Party urges voters to ‘throw the rascals out’ and elect officials who WILL carry out the resolution.”

It should come as no surprise that the chairman of the committee that drafted the resolution is Jack M. Finger, perennial City Council gadfly and self-proclaimed homophobe.

Finger was one of 14 applicants who sought to fill the unfinished term of former City Councilman Diego Bernal. During his interview with the City Council, Finger said he had “friends in the homosexual community.”

The resolution will be presented for a vote at the Bexar Republicans’ county executive committee meeting on January 8 at 6 p.m. at the Firefighters Hall, 8924 Interstate 10 Frontage Road.

Fox San Antonio is reporting that two employees of The Saint were beaten by strangers in the parking lot of...