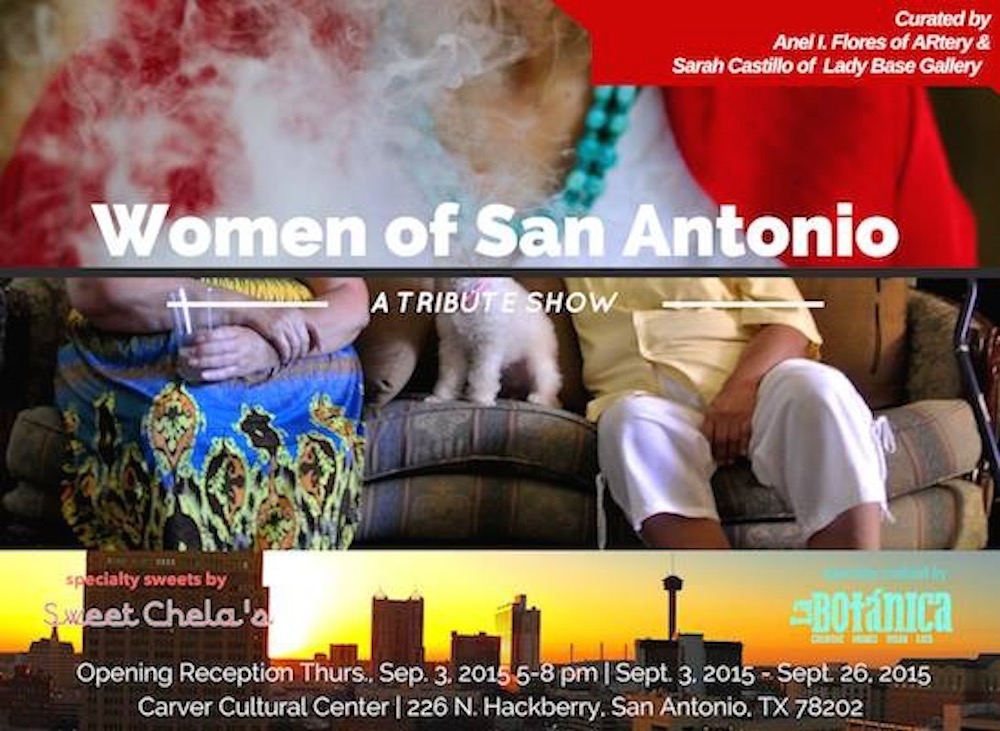 “San Antonio was and is being built by the hands of women. I dreamt up the vision for this show because of a longing I have for these women to be honored and showcased in the elegance and rawness of photography,” says Anel Flores, lesbian artist, author, and co-curator of the upcoming photography exhibit Women of San Antonio: A Tribute Show. “So many of our leaders are often forgotten … There was a time here in San Antonio where UTSA was at the forefront for having the largest number of Chicana professors with PhDs … and nobody ever spoke about it …When we’re like one percent of the population and so many of them were at UTSA and nobody was recognizing them, there’s a problem.”

In order to put the spotlight where Flores and co-curator Sarah Castillo of Lady Base Gallery believe it should be, the pair has invited nine local photographers to showcase their work at the Carver Cultural Center starting September 3. The photographers are all San Antonio women and will be showcasing pieces that depict other San Antonio women, some LGBTQ, some elderly, some community leaders, and others who are not known by the community but are leaders in their own right.

Under the guiding notion of women as this city’s foundation, Flores believes inter-generational collaboration is key to curating a photography exhibit in honor of San Antonio women. “Women are in this together. We are in a community. We don’t do anything solo … My concept really came from partnering young women photographers with elder women in San Antonio so that we can honor them. Because we wouldn’t be doing what we’re doing today without these women … Part of the concept comes from wanting to bring generations together and strengthen relationship we have as women, even if we’re not working together physically, we’re working together inter-generationally without even knowing it.”

The work Flores has contributed depicts two queer couples: Deborah Myers and Nickie Valdez, who have been together for 30 years and are soon getting married; and San Antonio activists Dolores Zapata Murff and Magdalena Alvarado. Flores feels they have “built models for us of who and how we can shape families in our LGBT community.” She also photographed the women of Fuerza Unida, “a family of women who came together to make a cooperative to sustain their families, their community, and each other after being laid off from Levi’s.”

Trans photographer Lauryn Farris will be showcasing four “enhanced portraits” for the exhibit. Her pieces are of women she considers personal heroes and her “hope for the future.” Among them are San Antonio trans woman Michelle Myers, who recently passed away; Ruby Krebs, the first person to run for local office as an open trans woman; Reverend Naomi Brown, of the Metropolitan Community Church and Pride Center San Antonio; and Graciela Sanchez of the Esperanza Peace and Justice Center. “They’re all women who have gone beyond the leading edge of a society that doesn’t necessarily accept the LGBT community … They’ve always been and exemplified the strength of all of our communities.”

Photographer Mari Hernandez will be displaying photographs of historian Antonia Castañeda and of her own 96-year-old grandmother, a purposeful juxtaposition. Castañeda is a respected community scholar who “continues to support women and artists and educators in San Antonio.” Hernandez’s grandmother is not a public figure, but Hernandez feels that all women who have devoted their life to something beyond themselves deserve recognition. “Seeing the role that Antonia has played, and the role my grandmother has played …Although she wasn’t able to go to school or really get an education or maybe even do things that she desired on her own, she raised a huge family and I think a lot of the time women who devote their lives to other people in that way are overlooked in terms of being successful … So I’m putting them side by side to show them in the same light.”

Woman-led vegan restaurant La Botanica will be donating a craft cocktail for the opening reception and Maricela Olguin of Sweet Chelas will be serving cupcakes inspired by strong women in her life. The opening reception for Women of San Antonio: A Tribute Show will be September 3 from 5-8 p.m. at the Carver Cultural Center.

The LGBT community is mourning the death of two of San Antonio's most popular drag performers leaving many stunned at...