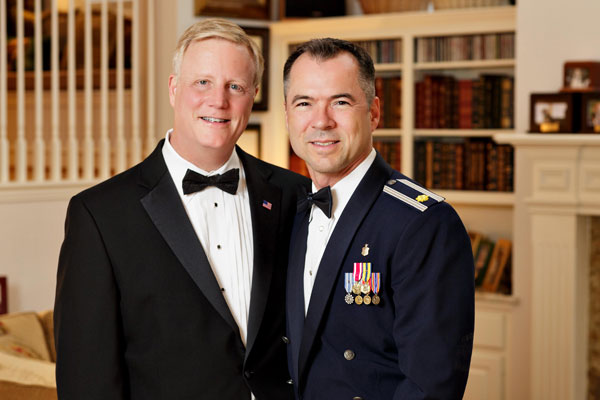 Mark Pharris and Vic Holmes, return to San Antonio this week to get the marriage license they weren't able to get two years ago. (Courtesy photo by Scott Hagar)

Two years ago on October 3, 2013, Vic Holmes and Mark Pharris went to the Bexar County Clerk’s office in San Antonio, applied for a marriage license and were turned down.

“We don’t do that in Texas,” they were told. However, on Friday, September 25 the two men, who now live in Plano, will return to the county clerk’s office with the knowledge that they will get their marriage license.

It’s an ironic twist that Rickhoff was named as a defendant, along with then Governor Rick Perry and Lt. Governor Greg Abbot, in an October 28, 2013 federal suit filed by the Holmes and Pharris challenging the Texas ban on same-sex marriages. The case was assigned to Federal District Judge Orlando Garcia in San Antonio.

Holmes and Pharris were joined by a second couple, Cleopatra DeLeon and Nicole Dimetman as plaintiffs in the suit. Oral arguments were heard by Judge Garcia on February 12, 2014.

On February 26, Garcia ruled against the state’s ban on same-sex marriage, writing that “Texas’ current marriage laws deny homosexual couples the right to marry, and in doing so, demean their dignity for no legitimate reason.”

The case went on the the Fifth Circuit Court of Appeals in New Orleans where arguments were heard on November 24, 2014. The case was still pending in the Fifth Circuit when the U.S. Supreme Court ruled on June 26, 2015, in Obergefell v. Hodges that the denial of marriage rights to same-sex couples is unconstitutional.

Pharris says after 18 years together he and Holmes will finally be married on November 21 in Frisco, Texas with former Congressman Charlie Gonzalez as the officiant.

“The wedding will be Texas-sized, with approximately 250-350 attendees,” says Pharris.  “Our rings — wedding bands with one diamond embedded in each from diamonds previously included in a ring of my deceased father – will be carried on two flags, both courtesy of Senator Harry Reid’s office: one flew over the U.S. Capitol on April 28, 2015, the date the Supreme Court held hearings in Obergefell, and the other flew over the U.S. Capitol on June 26, 2015, the date the Supreme Court issued its decision in Obergefell.”

“This is what the marriage equality fight was all about – enabling couples who loved each other to marry, a right the U.S. Supreme Court correctly said is fundamental to us all.  Love, equality and justice won,” says Pharris.

Out of the kitchen: Fred Anthony Garza

Garza was inspired by the play Doña Rosita’s Jalapeño Kitchen. At first glance, it would seem problematic at best to...