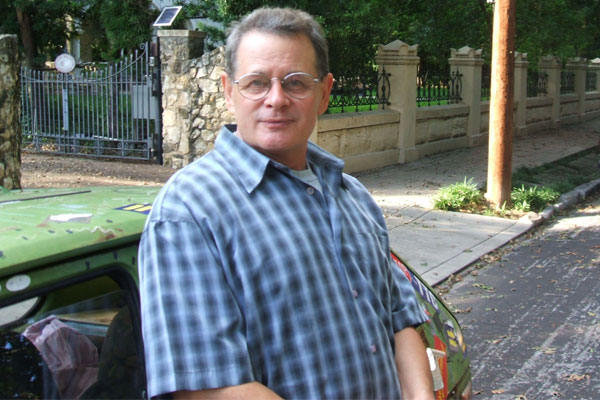 Artist and activist Gene Elder was arrested in Alamo Heights on July 14. (Photo by Sam Sanchez)

Artist, activist and Out In SA columnist Gene Elder was arrested on July 14 in Alamo Heights where he was charged with interfering with an arrest and resisting arrest.

Police took Elder into custody after he tried to give his business card to a boy who police were questioning and who Elder believes was being bullied by the officers.

“Yes, I was really arrested. This is not a joke . . .” Elder wrote in an email to friends and associates on the day after his incarceration.

Elder told Out In SA that on the night of the incident, he was driving home to River Road after having dinner with friends. He says as he approached the corner of Broadway and Austin Highway, he saw two Alamo Heights police officers interacting with a young male who Elder guessed was 12 or 13-years-old.

“They had him standing at attention in front of the police car headlights and I could tell from their body language that they were bullying him,” says Elder. “I pulled my car over and parked behind the police car so I could watch what was going on.”

Elder says one of the police officers came over and told him to move his car. Elder found a parking space, got off his car and approached the two policemen and the boy. Elder says he wanted to give the boy his business card.

“I asked the boy if he did anything wrong,” says Elder. As soon as he got close to the boy, one policeman grabbed Elder and twisted one of his arms behind his back.

“I was thrown up against the patrol car and both officers shoved my arms up higher than is possible for them to go behind my back and yelled at me that I was being arrested for resisting arrest and interfering with an arrest,” Elder wrote in the email to his friends.

“It all happened so fast that I didn’t know I was being arrested,” he says. “I’m not resisting arrest I told the officers. ‘Yes you are,’ they responded. Obviously these officers did not think anyone needed to be observing this bullying of the boy.”

Elder says once police had him in custody, they let the boy go and took Elder to the Alamo Heights police station’s jail and then later to the Bexar County Jail where he spent the night in a crowded cell. At 8 a.m. the next morning, Elder’s friend, attorney Ronald Guyer, got him released.

Many of Elder’s friends responded to his email with their own stories about the Alamo Heights Police.

Nightclub singer Ken Slavin, told Elder, “I know first-hand how aggressive Alamo Heights police can be. They act like you’re an axe murderer when they pull you over for speeding or an expired registration – both of which happened to me . . .”

One friend wrote, “Darling! They hate that kind of interference. I was arrested that way once, too!” Another said, “And all over AH you see Stop Bullying signs!”

Scores of others chimed in.

Elder must appear in court on August 5, at which time he says he plans to plead innocent to the charges. He says he also hopes to find out why the police had detained the boy.

The Happy Foundation and more

Elder is the archivist for the Happy Foundation, an archive and repository for local LGBT ephemera stored in a large, back room at the Bonham Exchange. However, his bona fides as artist, activist and gadfly-in-general are much broader. Gene Elder at the Happy Foundation Archives which are housed in the Bonham Exchange. (Photo: UTSA Libraries Special Collections)

In 1973, he became manager and part owner, with Arthur “Hap” Veltman, of the San Antonio Country, a popular gay disco which was the predecessor to the Bonham Exchange. In 1979, Elder ran for Mayor of San Antonio on the Party Party ticket.

In 1984, Elder was crowned King Anchovy presiding over Cornyation’s Court of Wretched Excess. Later that year, Elder curated a time capsule for the San Antonio Museum of Art which will be opened in 2181.

In 2012, the Advocate reported, “A gay rights activist was barred from emailing San Antonio city officials after he inundated them with everything from development complaints to suggestions for sensitivity training to movie recommendations. Gene Elder doesn’t own a computer, instead sending missives through his neighbor’s computer or computers at churches or universities.”

In August of 2014, the University of Texas at San Antonio added Elder’s journals to its UTSA Libraries Special Collections.

Elder’s Out In SA column, On the Chartreuse Couch, is a series of light-hearted interviews with artists, writers and local luminaries.

Elder told Out In SA that this is the second time he’s been arrested. “In October 1987, Hap Veltman, Kenneth Garrett, Wade Strauch and I attended the Gay March in Washington D.C. and I did get arrested with others from the gay community on the steps of the Supreme Court during a civil disobedience demonstration.”

When RuPaul’s Drag Race (RPDR) premiered on the Logo network in 2009, no one could have predicted the type of...