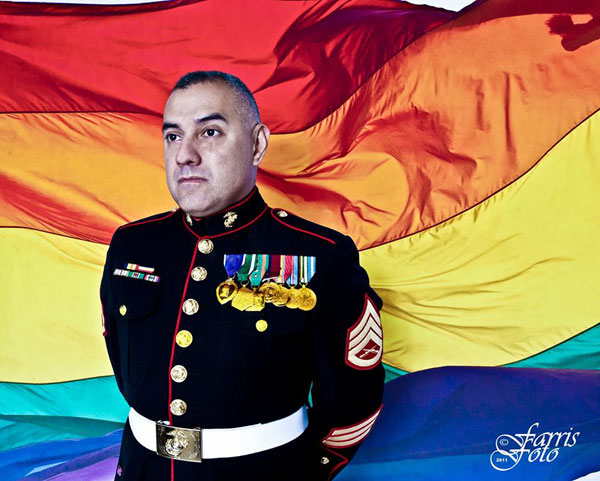 The San Antonio chapter of the Human Rights Campaign announced this week that retired Marine Sergeant Eric Alva will be honored with the Chuck Jordan Award for lifetime advocacy at the group’s Gala and Silent Auction on November 21.

In March 2003, Alva was the first soldier injured in the Iraq War when he stepped on a land mine resulting in the loss of his right leg and part of an index finger. Two years later, Alva contacted HRC and asked to be involved in their campaign to repeal the military’s Don’t Ask, Don’t Tell policy.

On February 28, 2007, Alva stood alongside Rep. Martin Meehan (D-Mass.) when the congressman introduced a bill to repeal Don’t Ask, Don’t Tell. On July 23, 2008 he testified before Congress. His testimony was republished as an essay in the Huffington Post.

In the summer of 2009, Alva joined U.S. Representative Patrick Murphy (D-PA), representatives from HRC and Servicemembers United to launch Voices of Honor: A Generation Under Don’t Ask, Don’t Tell. The national tour highlighted how the policy hurt military readiness and national security while putting American soldiers fighting overseas at risk.

When Don’t Ask, Don’t Tell was repealed in 2010, Alva stood on the dais next to President Barack Obama as he signed the order to end it.

Today, Alva continues to travel around the country speaking on issues of LGBT equality. He is also on the board of directors of Fiesta Youth, a local program that provides education, peer-support and advocacy for LGBT teens and young people.

Speaking out for equality

Following are comments Eric Alva made in 2009 at the Washington, DC press conference for Voices of Honor: A Generation Under Don’t Ask, Don’t Tell.

Good morning ladies and gentleman thank you for being here. My name is retired Marine Staff Sergeant Eric Alva.

Six years ago, on March 21, 2003, I was part of a logistical convoy with 3rd Battalion, 7th Marines. My unit was part of the first wave of ground troops that entered the country of Iraq from Kuwait to start the ground invasion of Operation Iraqi Freedom. I had been in Iraq no more than three hours, when I stepped on a landmine near the city of Basra suffering life threatening injuries. I had a broken left leg, a broken right arm with severe nerve damage, and a badly injured right leg that doctors had to amputate in order to save my life. I had become the first American service member to be injured in Operation Iraqi Freedom.

It was not until February 28, 2007, that I announced not only to the people of the United States, but to the rest of the world that the first American injured in the Iraq war was a gay Marine. I had decided to be true to myself and my country by coming forward and announcing who I am. My coming forward was to tell the citizens of this country, that as a patriotic American when I went to fight the war on terrorism it was for the rights and freedoms of every single person in the United States, not just selected individuals. That means every single individual regardless of who they are.

I stand here today on two good legs again, with my fellow service members, and a courageous Congressman, Patrick Murphy, to show my support for HR 1283 the Military Readiness Enhancement Act. It is time to let people be judged for their merit, professionalism and their leadership. This is a time that we should not be firing anyone from their job in the United States Armed Forces solely for being gay. One year ago we celebrated the 60 year anniversary of the desegregation of our Armed Forces. At the time, people said it would not work. They were wrong. Now we are facing a similar debate with the repeal of Don’t Ask, Don’t Tell. We need to end this discrimination in the United States once and for all, and be true to what we mean when we state “with liberty and justice for all.”

"I know what it's like on both sides of the fence."  You know what I miss the most about having...