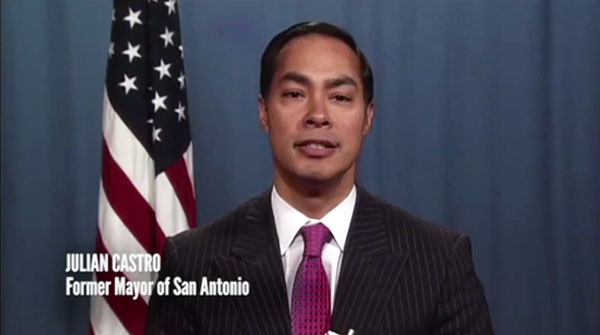 Former San Antonio Mayor Julian Castro has endorsed the Houston equal rights ordinance (HERO) which will be voted on November 3.

In May 2014, with Mayor Annise Parker’s support, the Houston City Council passed the ordinance in an 11-6 vote.

After its passage the ordinance faced strong opposition from local Christian extremists who petitioned for its repeal. Last July, the Texas Supreme Court ruled the Houston City Council must repeal the ordinance or place it on the November 3 ballot.

According to the Houston Chronicle:

“The ruling [came] three months after a state district judge ruled that opponents of Houston’s contentious non-discrimination ordinance failed to gather enough valid signatures to force a repeal referendum . . . Opponents sued the city, complaining that City Secretary Anna Russell had determined that petitioners had collected enough signatures to force a repeal measure onto the ballot, but had been overridden by Mayor Annise Parker and then-City Attorney David Feldman, whose staff determined many of the valid signatures were on invalid petition pages . . . Houston voters twice have rejected protections or benefits for gays, in 1985 and in 2001.”

In the ad, Castro mentions his successful efforts to add LGBT protections to the nondiscrimination ordinance in San Antonio which passed two years ago. Castro says he “believes everyone should have an opportunity to earn a living and provide for their families, free from the fear of discrimination.”

A professor from the University of Texas at San Antonio is working on opening a clinic downtown which will provide...