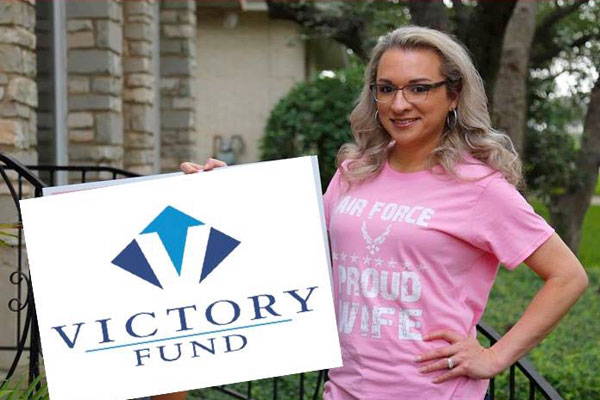 Gonzales-Wolfe was one of 17 openly LGBTQ candidates who the Victory Fund endorsed during this election cycle. The endorsements represent the Victory Fund’s commitment to increase LGBTQ representation in city governments and school boards.

The District 8 race has three candidates: incumbent Manny Pelaez; Tony Valdivia, a financial analyst for USAA; and Gonzales-Wolfe, who is a political consultant.

“I am a very proud trans woman running for office and have been a member of the Democratic Party for 23 years now,” Gonzales-Wolfe told the Stonewall Democrats ahead of their endorsement forum last March. “I have worked on over 50 local, state and national elections and ballot initiatives and have worked tirelessly to elect candidates that I felt were going to be the best representation of my voice at the table.”

“With today’s political climate, and the LGBTQIA community continuously being marginalized for simply living our truth, I was left with no other option but to stand up, raise up and use my own voice while working to have a seat at the table. Representation is important and our government should be depictive of its community,” Gonzales-Wolfe added.

Besides the endorsement from the Victory Fund, Gonzales-Wolfe also has been endorsed by the San Antonio AFL-CIO Central Labor Council.

For the Victory Fund, candidates like Gonzales-Wolfe can help bring about change on the local level.

“This year we can elect an unprecedented number of LGBTQ local officials, including mayors, city councilmembers and schoolboard members who can strengthen LGBTQ political power in cities big and small,” said Mayor Annise Parker, president & CEO of the Victory Fund.

“It is local elected officials who have the most impact on the everyday lives of constituents – ensuring services are running and needs being met. LGBTQ local officials become role models for our youth, change perceptions of our community, and are the leaders who become our state representatives, members of Congress and governors,” Parker said.

Originally published in the San Antonio Current. Around 2002, Ana Sandoval was on the cusp of a life-changing decision. She...