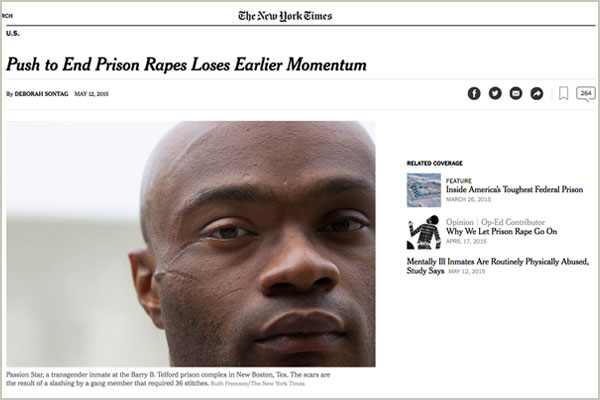 Lambda Legal has settled a lawsuit in the case of Passion Star, a black transgender woman who experienced repeated rapes, physical assaults and an attack with a razor while she was incarcerated in all-male prisons in Texas.

The agreement, which was announced on March 15, includes a monetary settlement and an update to the state prison system’s policy to better protect LGBT people being held in Texas prisons from sexual abuse.

“For years, I was raped and beaten in prison and when I asked for help I was ignored. I was hurt, scared, and thrown in solitary in hopes that I would be forgotten, but today I can be proud that I never gave up. No one should be terrorized in prison and have to experience a nightmare like that,” Star said in a statement.

According to Lambda Legal, Star was placed in the general population in multiple prisons “in close proximity to inmates who she had identified as having threatened her, including one occasion in November 2013 where the identified inmate then attacked Passion, calling her a ‘snitching faggot,’ and slashed her face eight times with a razor.”

The federal lawsuit was first filed in October 2014. In it Lambda Legal claimed the Texas Department of Criminal Justice acted “in deliberate disregard to the real and evident threats she faced, ignoring the State’s own written policies regarding treatment of LGBT people in custody, the documented evidence of gang activity in Texas prisons, and the federal Prison Rape Elimination Act.” Star was originally jailed when as a teenager she pleaded guilty to aggravated kidnapping based on allegations that she and her boyfriend at the time refused to return a used car they were test driving.

The boyfriend, who was at the wheel of the car with the auto salesman in the passenger’s seat and Star in the backseat, drove the car 40 miles out of town and abandoned the salesman on the side of the road. The salesman notified police who pursued the couple. The car ended up in a ditch when the boyfriend lost control during the chase.

Star was sentenced to 20 years in prison and transferred to the custody of the TDCJ where she was housed in male facilities. In December 2016, she was granted parole and was released in June 2017, 14 years after she was first incarcerated.

“Passion experienced brutal violence, degradation, and discrimination in prison. She is a transgender woman who was forced to live in terror in a men’s prison and the officials charged with her care refused to take adequate steps to keep her safe,” said Demoya Gordon, Lambda Legal’s transgender rights project attorney.

“We are pleased with the resolution reached with prison officials. We are hopeful that this sends a strong message to prison officials: Sexual assault and violence against LGBT people who are incarcerated will not be swept under the rug.”

Originally published in the San Antonio Current. Hollywood heartthrob and San Antonio business owner Armie Hammer may have missed an...