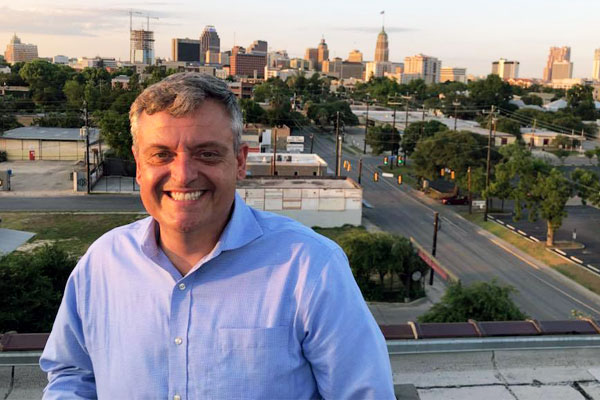 An executive with a local hotel management company, who is a member of the San Antonio LGBT Chamber of Commerce, has officially appointed a campaign treasurer, initiating a possible run for the City Council District 1 seat currently held by Roberto C. Treviño.

Justin Holley, partner and vice president of ABH Hospitality, has named Henry Brun as his campaign treasurer. Brun is a local musician who serves on the city’s Arts Commission and the Visit San Antonio board.

News of Holley’s possible run for office first appeared in the Rivard Report. Holley told the publication, “I never wanted to be a politician [until] now.”

Holley’s company manages eight hotels in the San Antonio area for Holiday Inn and La Quinta. He is board chair of the San Antonio Hotel and Lodging Association and sits on the board of Visit San Antonio.

Holley hails from Wisconsin where he graduated from the University of Wisconsin-Stout in 1994 with a degree in hospitality and tourism. He worked as a general manager for La Quinta for 12 years, took a year off in 2006 to travel the world, and eventually ended up in San Antonio where he lives in a renovated home near Woodlawn Lake.

According to the Rivard Report, Holley is fiscally conservative, socially liberal, and as a gay man believes, “Government is there to protect its citizens. Everyone should be treated equally.”

Holley is active in the LGBT community. His company was one of the sponsors of Pride Center San Antonio’s 2016 New Year’s Eve Kiki. Earlier that year, Holley was one of over 200 small businesses owners from across the state who signed a letter in opposition to any legislation which would legalize discrimination against LGBT Texans or visitors to Texas.

Holley told the Rivard Report that “Texas will be viewed as closed for business” if the state ever passed an anti-trans bathroom bill.

It is too early to gauge how Holley would fare in a race against Treviño. However, in the last municipal election, Treviño was challenged by five opponents in the primary and in the runoff, faced off against attorney Michael Montaño, who had strong support among LGBT voters.

As the citizens in District 1 contemplate next year’s election, Holley offers a counterpoint as someone who is part of an industry that is vital to the district and the city’s economy.

A post on his company’s website boasts, ” [Holley] adds outside the box creativity to his role as ABH’s man for human resources and payroll, when he’s not acting as the firm’s resident wordsmith. His talent as a networker is exemplified in his reputation as the ‘connector’ of the team. He thrives at connecting clients with people who have the right resources to help their hotels thrive in their respective communities.”