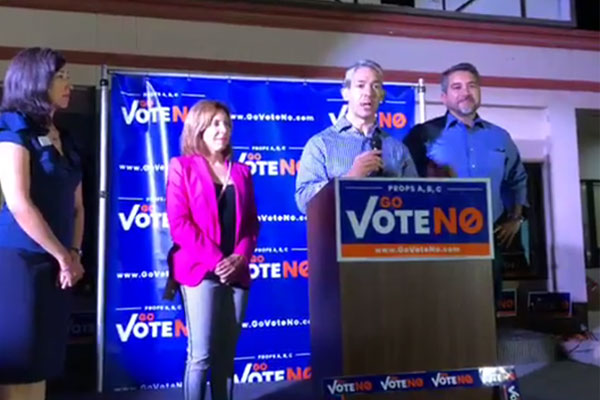 In a statement issued on November 7, San Antonio Mayor Ron Nirenberg says he is “proud and grateful” for the defeat of Proposition A, which was rejected by 54 percent of voters.

If Proposition A had passed, it would have lengthened the amount of time needed to collect signatures for referenda, and reduce the number of signatures needed from 75,000 to 20,000. It would have made it easier for special interest groups to challenge ordinances passed by the City Council, crippling its ability to govern effectively.

“San Antonio voters sent a strong message last night. By rejecting Proposition A, voters made it crystal clear they are tired of special interest politics and want us to continue moving forward down the path of prosperity and economic growth,” Nirenberg said.

Prop A was of particular interest to LGBTQ voters because it offered those who opposed equal rights a vehicle by which they could roll back or deny equal treatment to the community.

Ahead of the vote, Pastor Gerald A. Ripley, a Christian extremist and the main organizer of the Pastor’s PAC, had been circulating a letter in which he wrote “If Amendment ‘A’ passes, it will give a realistic opportunity to undo the 2013 ‘Bathroom Bill’ (aka Non-Discrimination Ordinance) passed by City Council . . .”

After the city enacted the nondiscrimination ordinance in 2013, Ripley was among those who sought to repeal the ordinance. He led a referendum against the measure but could not muster the nearly 61,000 signatures needed to put it to a public vote.

Ripley said he was planning another referendum, writing in his letter that if Prop A passed, “We will certainly have a better opportunity to require City Council to rescind similar egregious decisions . . .”

In an essay in the Rivard Report, transgender activist Ashley Smith warned against Prop A, saying “If special interest groups could leverage Prop A against my community, they could undercut civil rights for many other people in San Antonio and harm the most local interests of many neighborhoods.”

“San Antonio is booming and the people are determined we stay focused on creating jobs and ensuring our city thrives and succeeds,” Nirenberg said. “I am proud and grateful that our entire community – from business leaders to community organizers to neighbors – came together to protect the future of San Antonio.”

In Texas, the “Rainbow Wave” Outpaces the Blue One

Fourteen of 35 LGBTQ candidates won their races Tuesday night, and activists say the 2018 election will carve a path...