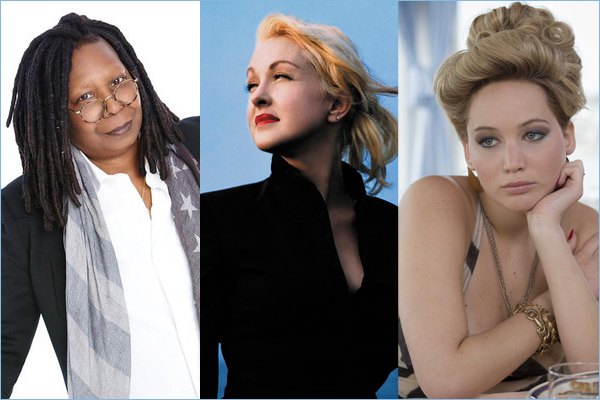 Whoopi Goldberg, Cyndi Lauper and Jennifer Lawrence are among 140 musicians and artists who signed a letter opposing anti-LGBT legislation in Texas. (Publicity/courtesy photos)

Over 140 musicians and actors including Jennifer Lawrence, Whoopi Goldberg, Cyndi Lauper and Lady Gaga have signed a letter opposing the bathroom bill and other anti-LGBT measures currently under consideration by the Texas Legislature.

“Please know that the creative community is watching Texas, with love for all of its people and for its contributions to music, art and culture,” the letter states. “We are deeply troubled by the current legislation that would target the LGBTQ community in Texas.”

The letter was organized and distributed online by Equality Texas under a campaign dubbed #TxTogether.

Foremost among the concerns cited in the letter is Texas Senate Bill 6 which bars transgender people from using the bathroom that matches their gender identity and would prohibit local ordinances from protecting trans citizens from discrimination in public accommodations.

Among other proposed legislation mentioned in the letter is a bill that would oblige teachers to out LGBT students to their parents, bills that would undermine spousal benefits for same sex couples who are married, and bills that would strip local governments of their nondiscrimination ordinances.

The letter offers yet another chorus of voices opposing the proposed bathroom bill. The Texas Association of Business has said it opposes the bill and any “legislation that is seen as discriminatory and would impact workforce recruitment and/or cause a negative economic impact on the state.”

Last year, the NCAA yanked seven championship games from North Carolina in protest of laws targeting the transgender community. If the Texas Legislature passes the bathroom bill, it could risk the City of San Antonio losing the NCAA Final Four basketball tournament which it is scheduled to host in 2018.

Texas political leaders have been cavalier in their support of SB6. Lt. Governor Dan Patrick recently said “there is no evidence whatsoever” to support the ‘bogus’ idea that state-sanctioned discrimination could carry a hefty price tag.

The artists who signed the letter offer a counterpoint to the din of anti-LGBT voices in the Texas state government.

“Artistic expression has always been a political act,” the artists’ letter says, “. . . and some of the most venerated artists in our history have put themselves on the line to take a stand against injustice. We humbly add our names to that proud tradition today, in asking you to end the needless targeting of LGBTQ people in Texas.”