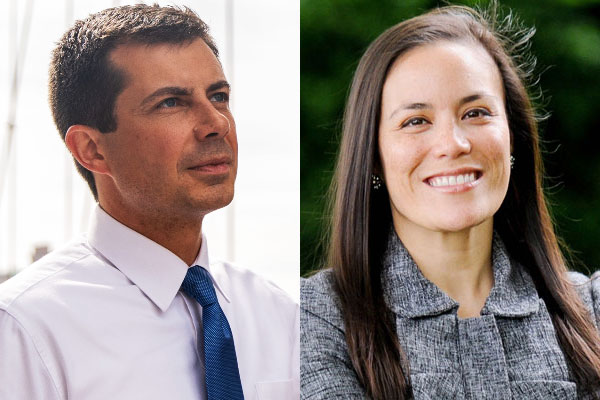 The endorsements were made under the aegis of Buttigieg’s Win the Era PAC which was established “to support candidates who embody and lift up the values that bring Americans together.” The organization was founded by Buttigieg in April 2020 following his presidential campaign.

In a statement on the Win the Era website, Buttigieg writes, “An Air Force Veteran, Gina Ortiz Jones ran a pioneering and very close race in 2018 in a key, fast-evolving Texas Congressional district. Now it’s an open seat, and her style of leadership is needed on Capitol Hill more than ever. She represents a new generation of Democrats with a deep understanding of national security issues and a view to the future that will serve her district and our country well.”

“I’m honored to have @PeteButtigieg’s support! Having also served under DADT, we know the importance of electing leaders with the courage to treat all Americans equally under the law — from the workplace to the ballot box,” Jones replied on Twitter.

Jones is a native of San Antonio, an Air Force veteran, a former member of the National Intelligence community, and an out lesbian. She moved back to San Antonio from Washington DC in June 2017 and is living in the house where she grew up on city’s northwest side.

In 2018, Jones challenged Republican Rep. Will Hurd for 23rd Congressional District seat but lost the race by less than 1,000 votes. “While we came up short this time, we ran a race of which we can be proud,” she said in a written statement at the time. “I remain committed to serving my community and country, and I wish Will Hurd the courage to fight for TX-23 in the way in which our district deserves.”

In May 2019, Jones announced she would again challenge Hurd. “Last November, I came up a little bit short in my run for Congress — 926 votes — but I’ve never been one to back down because the promise of our country is worth fighting for,” she said. “It’s why I served in the military, deployed to Iraq; it’s why I served in President Obama’s administration and it’s why I’ve dedicated my life to public service — and it’s why I’m stepping up again to run for Texas’ 23rd Congressional District.”

In a statement on the endorsement process, Win the Era says it “will leverage the strength of its national community to support these candidates by introducing them to its members and identifying ways individuals can support these campaigns financially and through organizing efforts. Win the Era will continue to announce additional candidate endorsements in the coming months.”

Following is the list of the other candidates endorsed by Win the Era.

Originally published in the San Antonio Current. Democratic nominee Gina Ortiz Jones hasn’t been elected to serve the people of...