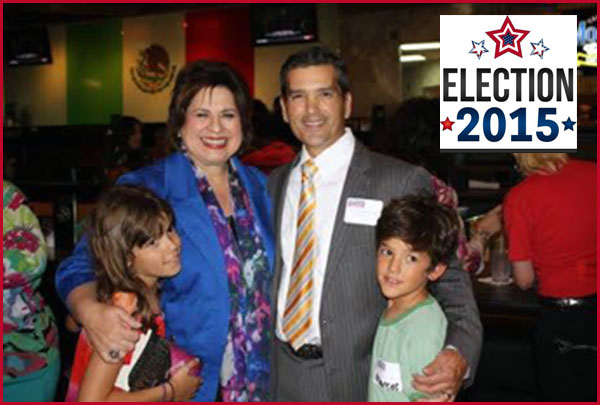 Mike and Leticia: Choosing between friends

With early voting for the municipal election starting on April 27, Out In SA has winnowed the mayoral race down to the top two candidates in the queer community. Mike Villarreal and Leticia Van de Putte are allies who have put LGBT voters in the position of choosing between friends.

What follows is a reprint of interviews Out In SA did with Mike and Leticia for our February 2015 print edition.

You spent 14 years in the Texas House. What are some of your proudest achievements?

Mike: There’s two bodies of work I am very proud of, one is improving education opportunities in our state and the other making our property taxes more responsive to our taxpayer. I sat on the education and the ways and means committees.

In education I’m really proud of all of my efforts to increase the funding for Texas Grants which is the scholarship program that helps students, who make the grades but don’t have the finances, to go to college.  Every session I fought for that program and helped to expand it. I played a big role protecting it against cuts whenever we had revenue shortfalls.

I’m a big advocate of reducing standardized testing, increasing our funding for early education and giving our high school students who don’t go to college an opportunity to take high quality career and technical education courses.

Can you tell us about the LGBT legislation you proposed in 2013?

Leticia: I was every excited to file [Senate Bill 237] which would have inserted the words “sexual orientation and gender identity” into our nondiscrimination policies for employment.  I knew it was an uphill battle in a conservative legislature but we were able to get a hearing and it was a great hearing. I actually lacked one vote to get it out of committee. Now I don’t know that I would have been able to get it passed but we were going to introduce it again in 2015.

Questions for both candidates

What in your background and work experience qualifies you for the position over your opponents?

The fundamentals of managing our financing and charting a course where our city government is making sound investments at the lowest cost. That is a relevant, real challenge. As a person with deep experience in finance, I’ll be able to lead our city on that topic.

Leticia: Proven leadership. Proven results. I loved being a legislator. The joy in that is working with other people: To overcome challenges, to get to middle ground, to lead. I’ve done that over and over again in different areas. I know can lead this city, work with city council, bring all the stakeholders to the table.

I love Tommy Adkisson, he’s been to all my children’s baptisms. He’s a dear friend. I had hoped he would not run against my good friend Nelson Wolff but he did. Tommy is a great campaigner. Mike, I’ve worked with him in the legislature. But as far as proven leadership, my record speaks for itself.

In 2013, the city passed the nondiscrimination ordinance but the measure lacks procedural guidance or an enforcement mechanism. Mayor Taylor appointed an LGBT advisory group to work with her but they may not finish before her term ends. What can we do to expedite this process?

Mike: I think we need to complete the process, this is a policy passed by the council. There has to be system to file a complaint, for adjudicating any difference of opinion of someone filing a claim versus someone defending themselves. That whole administrative process needs to be created. There should be consequences for violating the NDO.  This is what should just happen. Everyone who voted for the NDO expects it. I will see to this and make sure it happens in short order.

Leticia: What I’ve learned as a lawmaker is that it’s not enough to pass a law, it’s the implementation. I was asked recently if I thought the NDO was effective and my reply is that we won’t know until it’s tested. With any policy or law it’s got to be more that just words on a piece of paper. It’s got to come to life. Let’s hope they can accomplish this before the next council comes in but it’s got to be workable and there’s got to be a process. And if it’s not done, let me tell you, under a Van De Putte mayoralty, it will be something that needs to get done.

One thing lacking from the nondiscrimination ordinance was city-wide employment nondiscrimination for all protected classes. Do you think this is something that can be realistically pursued by the city council?

Mike: Since I was first elected I carried legislation that prohibited discrimination in the workplace. I feel that if you show up, if you play by the rules, then you should be treated fairly. As mayor I would like to lead a city that embodies that principle of fairness and justice.

Leticia: In the best of all possible worlds wouldn’t this be something that we want throughout our state and throughout our country so that people are treated with dignity and respect? It ought to be your skill set at the job site not who you love. I think we have too look at what’s on the books now [the NDO] and make sure it’s implemented. We have to make sure that works before we go on to the next step.

Recently the city council passed a series of regulations for Uber and Lyft that many think were too restrictive and thereby discouraging these companies from operating in San Antonio. Where do you stand on this issue?

Mike: I’m for ride-sharing companies. I think San Antonio should not be the only city in the state that is not serviced by Uber and Lyft. We should be leaders in the nation on a lot of fronts but not on regulating and suffocating companies. I’m concerned this sends a signal that San Antonio is not open for business, is not a city of innovation, is not a place where 20 and 30-year-olds cannot engage in the lasted technology innovations. As mayor I will do everything I can to reverse the actions of this current city council.

Leticia: I believe you should have criminal background checks because I want my mother, my daughter, my son and the people of San Antonio to feel total secure. This is service for hire. I feel very strongly that there’s got be liability insurance from the time a driver uses his personal automobile for transportation services.

What is the best way to guide gentrification of older neighborhoods to make sure they improve and prosper while not displacing longtime residents?

Mike: Number one is we need to recognize that the value of real estate in the central core of San Antonio is getting more valuable and is expected to continue into the future. That’s a positive thing.

The urban core is where our educated 20 and 30-year-olds want to live. It’s also where the creative class in general wants to live. If we can support that urbanization there are a lot of positive things that can happen. We also need to include our long-term residents and that means growth with inclusion. That means making sure that long-time residents get to partake in this growing real estate boom.

It’s not easy but its doable. There are strategies recognizing that residents in our older neighborhoods are in a variety of different financial circumstances, so it’s going to require more than one solution.

Leticia: It’s all about the balance and I’m glad the council has gotten a task force that had their first meeting on January 8. Councilwoman Viagran, Councilwoman Gonzalez and Councilman Trevino are very interested in this. So the work has already begun. Whoever steps in as new council members and myself as mayor will look at the template. We need to bring those stakeholders, the community members into the discussion, both those folks who the now see the center city as attractive and those who have always lived there.

I’m one of those people My house is valued at $149,000. We live just north of downtown and we’re seeing the same sort of thing happen. Pete and I chose to live there and that’s our community. I’m concerned for some of my neighbors who are retired. I’m glad the discussion has started. For me to say that I have the answer would be pretty arrogant.

Do you support an expansion of the PreK4SA program?

Mike: I supported PreK4SA and that revenue stream was established by a public vote. It’s an 8-year investment. We need to make sure we get the most out of that and that we are stewards of the taxpayer dollars and explain clearly the return that we are earning on this investment.

As mayor I’m gonna make sure we get the most out of the program. I’m excited about the next stages that are coming which include school districts expanding access to pre-k and that’s a good thing. The more we can include existing education institutions the better we are.

Leticia: I would like to see what the state is going to do. There was $200 million cuts to our pre-kindergarten program. Both Gov. Abbot and members of the legislature have said they want to return that and depends on how the state fills in. I think this is a great program but we need to see what our priorities are.

I would love to see is a universal Pre-K. There are signals from the legislature and the business community that this is high priority. But until then, we need to make sure that those children who absolutely need it do receive a quality full-day program.

Any words for the voters before the municipal election?

Mike: I’m excited about the opportunity of leading San Antonio at this time. There’s a lot of new energy in our city that needs to be extended and built upon. This is a moment in time when we have an opportunity to advance our city in a forward thinking way with the boldest, highest aspirations for our citizens.

Leticia: I had a full year to travel our big beautiful diverse state. The people were wonderful. They love their state. In my travels, I got a renewed sense of appreciation of my own hometown. I feel blessed to be able to change slightly the direction of my public service and come home and serve the people here. I want to be mayor. I know I’ve got those leadership skills.

Early voting begins on Monday, April 27 and continues through Tuesday, May 5. Click here to get a list of early voting locations. Election day is May 9.

Update: May 18, 2015 THIS EVENT HAS BEEN CANCELLED. The Thrive Youth Center for homeless LGBT youth has put out...