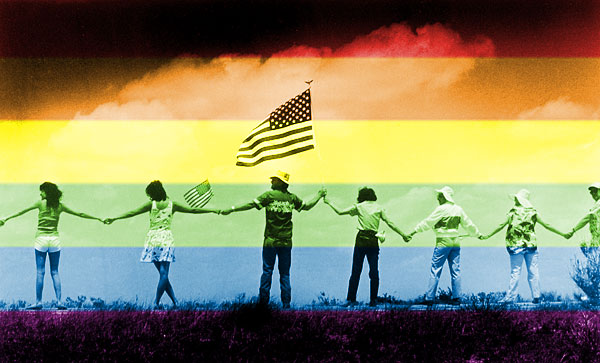 San Antonio resident Patrick Greene is planning LGBT and Straight Hands Across USA on July 4, 2016. The plan is to create a line of people holding hands along the length of Interstate 10 from California to Florida. The 1986 photo depicts Boston participants in Hands Across America.

A San Antonio ally says he’s getting tired of anti-LGBT activists getting so much attention in the press and on social media. In order to put out a more positive message, he plans to revive an idea from the 1980’s and stage a version of Hands Across America for LGBT equality.

Hands Across America took place on May 25, 1986. It was an event held to raise awareness of hunger and homelessness. On that day, about 6.5 million people held hands in a human chain for fifteen minutes along a path across the continental United States.

Patrick Greene and his wife Karen recently started a website called LGBT and Straight Hands Across USA, declaring on the home page, “When the American LGBT and straight communities join hands together nationwide to show their unity, and show the religious right that they are in the minority.”

Greene says he’s never been homophobic but homophobia has touched his life.

When he was in the military, Greene says he befriended a gay service member because they shared an interest in films. However, fellow soldiers often warned Greene of his friendship with the man.

In 1978 when Greene and his wife got married, he says none of his relatives or his wife’s relatives attended the wedding because the Best Man, a close friend of his wife’s, was gay.

In the 1980’s, Greene brought his stepson back into the family fold after the young man was disowned by his birth father because he was gay. The stepson eventually died of AIDS.

Greene says he’s grown weary of anti-LGBT “propaganda” on the national news, citing the controversy with Kim Davis, a Kentucky county clerk who would not issue marriage licenses to gay and lesbian couples and who got support from organizations like Focus On the Family and from politicians like Mike Huckabee.

Greene’s plan is to draw the attention away from the haters and onto those who support LGBT rights.

LGBT and Straight Hands Across USA would be held at noon (Pacific Time) on July 4, 2016. Greene envisions a line of people holding hands along Interstate 10 from Santa Monica, California to Jacksonville, Florida.

In order to raise awareness and to get the number of participants needed to create the human chain, Greene has reached out to chapters of PFLAG, Metropolitan Community Churches and Unitarian Church congregations located in major cities across the route.

Greene is putting out the word that he wants people from the community to register on his website to participate or volunteer to help with logistics. He says he welcomes participation from LGBT groups across the country and from San Antonio in particular.

“The only way we’re going to stop these people is to show them they’re in the minority,” he says.

You can contact Patrick and Karen Greene at [email protected]

Fresh off her appearance on season seven of RuPaul’s Drag Race, Orlando’s Ginger Minj is starring as Dr. Frank-N-Furter in...