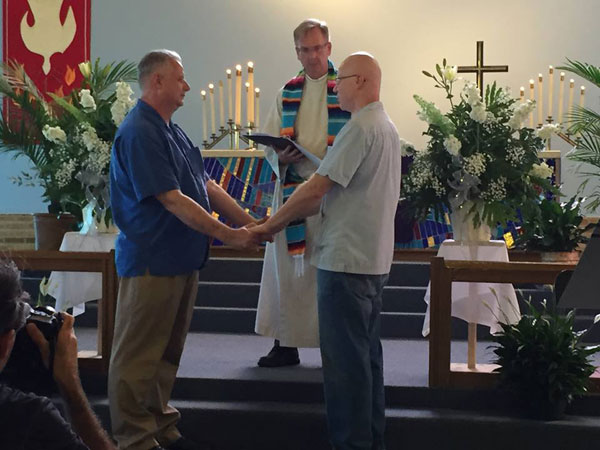 Tom Hall and Stephen Minor were married at the Lutheran Church of the Good Shepherd on June 26. Pastor Charles Fredrickson presided. (Photo by Sam Sanchez)

There was joy and laughter in the sanctuary of the Lutheran Church of the Good Shepherd tonight as scores of LGBT congregants and their allies celebrated the Supreme Court decision that brought marriage equality to the nation earlier today.

Pastor Charles Fredrickson stood proudly in the church foyer welcoming parishioners and guests of various religious denominations who came to witness some of the first gay and lesbian church weddings to take place in San Antonio.

The church, in conjunction with Equality Texas and Freedom to Marry, opened its doors to wed any and all couples who showed up with a marriage license. As Pastor Frederiskson told those at the service, it was a celebration for equality — the LGBT community were no longer second class citizens.

Many of those present were affiliated with congregations from the Progressive Religious Organizations of San Antonio, a network of welcoming churches. The Church of the Good Shepherd was all decked out and ready, candles lit, flowers in place. There was even a piano player.

Also present was Equality Texas community organizer Robert Salcido who in brief remarks said it was the happiest of days for the community but there was still a lot of work to be done. “You can get married and be fired from your job for being gay. You can be evicted or denied service,” he said, adding the community needed to continue supporting the cause of equality.

Pastor Fredrickson opened the evening with a champagne toast to those who did not live to witness this historic day, to give thanks that love conquers all and to a day when there is no more discrimination.

The first couple to be married were Tom Hall and Stephen Minor who told Out In SA they had been together for 28 years. During their ceremony, which was presided over by Pastor Fredrickson, each of the clergy present offered brief remarks and spiritual guidance.

When the pastor pronounced the men wed, the sanctuary broke out in thunderous applause.

Two couples present at the church had already been married earlier at the Bexar County Courthouse. Sylvia De Los Santos and Terri Carrisal said they had been together for 27 years and waited to marry until it was legal in Texas. Marsha Warren, who is the mayor’s LGBT liaison, and her partner Michelle Burnett were there to offer and receive good wishes.

Earlier in the day, Warren had posted on her Facebook page, “For all our family and friends this is a day I became legally complete. I praise God for the completeness and love of Michelle. Jumping the broom celebration to come later.”

One couple, Nickie Valdez and Deb Myers, who were there representing Dignity San Antonio, said they got their license but are waiting to have the wedding at a later date.

Pastor Fredrickson summed up the mood of the evening with his words to those present, “We are thankful to God that committed loving people of all sexual persuasions are now free to marry and be equal.”

More church weddings are scheduled at another location next week.

The Unity Church of San Antonio announced last month it plans to marry same-sex couples on July 4 at their sanctuary on the Northeast side. Rev. Linda Martella-Whitsett told the San Antonio Express-News that faith drove her congregation to plan the weddings.

The church is charging a $25 fee and anticipates multiple weddings performed all day long on July 4. (Use this link for registration form and additional information.)

In celebration of the historic June 26 ruling from the Supreme Court finding a Constitutional right to marriage for same-sex couples,...